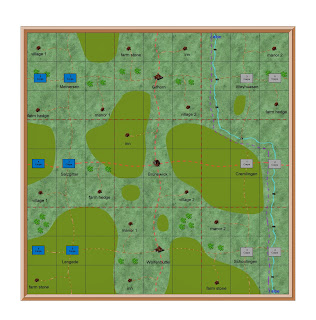 Campaign map with six corps per side

You will recall that the problem was to increase the size of campaign wargame armies from four to six corps per army.   This would result in more figures on the table, even for the smaller campaign games.

It would be easy for the French armies.   There are 13 corps available, so dividing them into 6 corps armies would not be a problem.

However for the Austrian, British, Prussian, Russian and Spanish armies there were only 4 corps available for each nationality.

I could have combined allied armies into a combination of two allied nations, for example Austrian and Russian, to produce a six corps army.   But this would cause problems with the permanent orders of battle proforma we used in our wargames.   It was not a huge problem, but it was a messy one.

I hope that the map above will make this more clear. 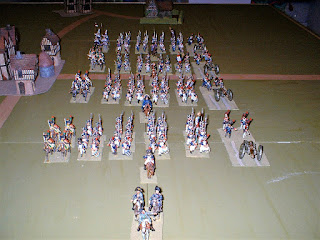 In the French army 1, 2, 3 and 4 corps are the original, and each are different figures

5 and 6 corps are new.   They are duplicates of 1 and 2 corps, and use the same figures.   The campaign will open with the three columns advancing to engage the enemy.   As the campaign progresses it is quite possible that the two centre corps may combine with either the two northern, or the two southern columns.   But it is very unlikely that the northern and southern columns will ever fight together.   This means that it will be possible to wargame any battle consisting of 1,2,3 and 4 corps.    Or 3,4,5 and 6 corps.

In theory this seems to work well, and will allow me to wargame with more figures in all campaign games.   But I will need to try it out for a couple of campaigns to see if there are any unforeseen problems.