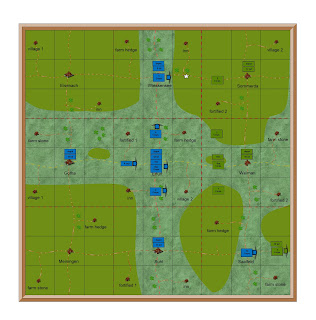 The main French army redeploys in preparation to attack Weimar

Both are well aware that the French will attack tomorrow, and it will decide the campaign

The Russians must not only hold the town, but also the road to Weimar 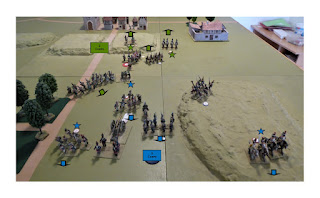 The battle is the hardest fought of the current campaign

The artillery preparation inflict similar casualties on both sides

The French lose the opening cavalry melee, but the Russians lose heavily

With both artillery and cavalry failing to gain an advantage, it is left to the infantry

Both enter the battle with casualties, but both fight on despite further casualties

At nightfall the Russians not only hold Sommerda, but also the road to Weimar

On the map you will see that both the French and the Russian main armies occupy three squares each.   On the wargames table they would occupy the whole width of the table on either side, with three empty squares in the centre.   This is necessary to allow each side to react to the advance to contact.

If both 2nd Russian and 5th French corps were to march south there would not be an empty scenic square for them to arrive.  This would give them an unfair advantage in the wargame.

So it was easier to fight the smaller battle of Sommereda to decide the issue.   It was similar to the Prussian battle for Plancenoit, in relation to the battle of Waterloo.   Equally important to the outcome, but without a confused mass on the table.

In life this type of battle is easy to react to.   Napoleon fed reserves into Plancenoit to delay the Prussian arrival at Waterloo.  But on the wargames table this is very difficult to recreate.   It is fine if there is lots of space for the reinforcements to arrive and deploy.   But if they arrive on the same scenic square as a corps already involved in battle to its front it is impossible to do so.

One of the advantages of a campaign is that you can avoid these difficult actions by simply ordering the Russians to defend Sommerda.

It also proved an interesting and enjoyable wargame.  Particularly as the Russians (played by Jan) won their first battle of this campaign.

The Russian seem to have performed the sort of military miracle that they have historically done so often ... and snatched victory from what seemed likely to be a defeat. I suspect that it might not secure them the eventual strategic victory they need, but it must have given the French a bit of a jolt.

It will also make a big difference if the French can not achieve a decisive victory at Weimar. The Russians will now be able to march south to support the main army there. Whatever happens it was certainly a French setback.