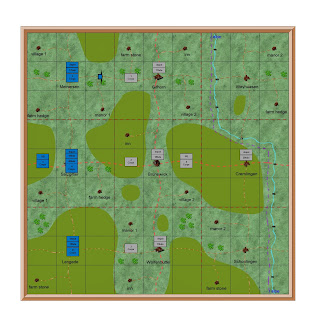 1 March 1813
On the first day of the campaign 3rd French corps attacked 1st Prussian corps west of Gifhorn.   The French won the battle, but lost 600 casualties.  The Prussians suffered 2800 casualties.

The corps which lost a battle have to retreat the following day, and to establish and maintain at least  one map square between them and the winners.

The winning corps normally moves forward to occupy the square in which the battle took place.  When it is for a town they normally move into the town. 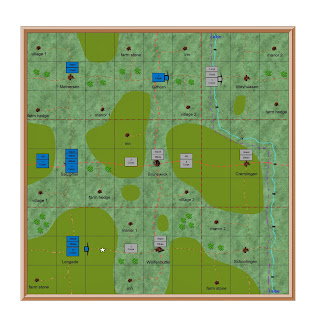 2 March 1813
3rd French corps have occupied Gifhorn.   1st Prussian corps have retreated towards Weyhausen, taking with them 17 brigade (garrison of Gifhorn) and 3 days supplies from the depot there.

Both corps have moved, and consequently both still have their battle casualties, and also routed or shaken brigades have not been able to rally.   To do so they must remain stationary for one full day.

Both corps started the campaign with four days supplies.   They have used two days, and have two left.   The French are still within three squares of their depot at Meinersen, and therefore can resupply from there.   The Prussians have lost their depot at Gifhorn, and not yet established one at Weyhausen.   They are out of supply range of the nearest Prussian depot at Cremlingen.   However they do have three days supplies which they took with them when they abandoned Gifhorn. 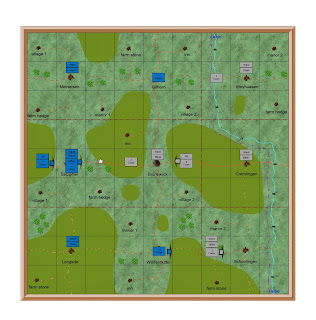 3 March 1813
Both 3rd French corps and 1st Prussian corps have orders to rally, resupply and reorganise.   They have remained stationary, and are not in contact with the enemy, so they can do so.

Rally means that all shaken and routed brigades become formed again.  This is automatic and does not rely on a morale test.

Resupply is automatic providing they are within supply range (three map squares) of a depot with sufficient supplies.

Reorganise means that all infantry casualties, less 400 per brigade, can be moved to one brigade.  This is always the one with the most casualties.   There is only one cavalry brigade and corps artillery, so this does not apply to cavalry or gunners.

The Prussians have suffered 2800 casualties, broken down as follows:

All of the infantry casualties, less 10% of 2 brigade, are already in 3 infantry brigade
Both the cavalry and artillery have 20% casualties
But only one of them can receive 10% replacement each turn
1 corps artillery receive 100 gunners
This is because priority for battle replacements is artillery, cavalry and then infantry.

If 1st Prussian corps can remain stationary, and avoid contact with the enemy, they will receive 100 cavalry replacements the next day, and then 400 infantry replacements each day until 3 infantry brigade is down to 400 (10%)

You will see from this that a corps can recover from a defeat, but not completely.   Each brigade will always carry at least 10% casualties

This has been a best case situation for the winner.   They started with four days supplies.   Issued one on the day of battle, a second to occupy the battlefield.   They could have pursued for two more days before they ran out of supplies.  But each day would take them further from their supply depot.   When they did run out they would lose 400 infantry for each day that they were out of supply.

The supply and reorganise rules are easier to operate than to explain.   When a corps is reduced to two days supplies they should either halt or prepare to resupply.

Each brigade that suffers battle casualties will be affected for the rest of the campaign.  Each 10% casualties results in minus 1 on all combat and morale tests.

So a simple, but non the less effective battle attrition system.