North Germany
Prussian Advance
Blucher was the first allied commander to be ready to take the field against the French.

The Prussian army was concentrated in and around Berlin.

On 20 February he ordered them to advance into Brunswick region.    His objective was the capitol city of Brunswick, which he entered on 25 February.

He was surprised to be able to do so without any French opposition.

He had ordered 1st French army to concentrate in Osnabruck region on 19 February.
This concentration was completed on the day he joined the army

1st French army was the strongest of the five French armies.   Not only was it commanded personally by Napoleon, but it also included 1st (Old Guard) corps. 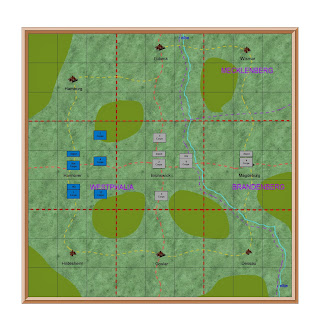 The Prussian army was concentrated around Brunswick city, in the centre of the region.   Napoleon was therefore able to occupy Hannover without any opposition.  He halted there to establish his lines of supply.

He was already in contact with the Prussian army, and on 1 March he ordered his army to advance and attack them.

Campaign Diary Blog
There is a detailed diary of the whole campaign.
It includes a daily record, including reports of all battles fought.
It also has orders of battle and maps of the campaign areas

You can find it here
http://1813pbemcampaigndiary.blogspot.com.es/