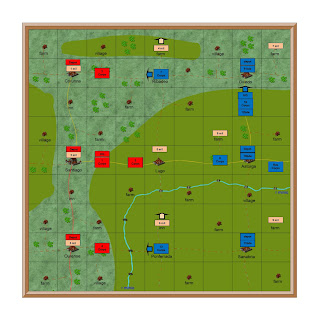 The campaign opens with a bold move by Marshal Soult.

In the south 13th corps is sent to occupy Ponferrada.  This is to make Wellington think that the French are about to attack his communications with Portugal.  And hopefully prompt him to move his reserve south to hold Ourense and the road south.

But the main attack is in the north, against Corunna.

The opening move sets the scene for the whole campaign.

An attack in the centre, against Santiago, would come up against Wellington’s strongest position.  He has placed two corps east of Lugo in anticipation of such a move.

Both Corunna and Ourense are attractive options.   The latter would cut his communications with Portugal, and force him back on the northern coast.   Should he then lose the campaign he would have to use the Royal Navy to escape.    This is the obvious choice, but it then allows the British to concentrate behind the river Minio, making it a very strong and easily defended position.

The capture of Corunna would place the French on the same side of the river Minio, making it easier to attack the same concentrated position at Ourense.  However it does give Wellington the option of containing the French in the north, and striking at their main base at Astorga.

Marshal Soult is a gifted commander and is not adverse to taking a risk.   He is determined to drive the British out of Spain, and this offers the best option.

Screened by the river he takes command of 16th corps and moves north to join 7th corps.  Together they will attack Corunna.   This leaves Astroga exposed to attack.   But he is banking on achieving victory before Wellington is aware that he has launched his main attack in the north.

Wellington is unaware of the planned offensive in the north.  It will take at least two days before he receives reports from the guerrilla bands in that area.
Posted by thistlebarrow at 13:00