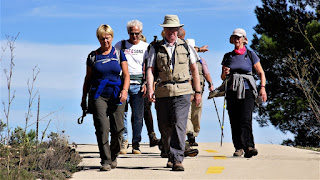 “Napoleonic Wargaming” was my first blog, but only just.

In April 2009 I started a second blog called “Jan and Paul in Spain”.   The aim is in the name as they say.   This one was to keep family and friends in the UK informed of what we were doing in Spain.   We had moved there in March 2006, and the first blog entry was for 26 March 2006.   I had a lot of photos of our first three years in Spain, and was able to illustrate each entry in restrospect.

Once more the intention was to keep a permanent record of our experiences.   To do so I decided to start a new blog each year.    The index to each entry would again be by using the Labels.

Our second great love, after wargaming, is hill walking.   We choose this part of Spain because it is a very popular walking area.    It is also very popular with British, German and Dutch ex pats.   We choose a small village about 15 miles from the coast because we wanted to live in rural Spain.   But we choose the Costa Blanca because we wanted to have access to a British speaking community when we wanted it.   Living 15 miles inland from Denia, Javea and Calpe was perfect.

Within weeks of our arrival we had joined a popular walking group called Costa Blanca Mountain Walkers.   They had developed a wide range of walks all within 20 miles of Parcent.   They offered guided walks twice a week, and we were soon regulars walkers.

Within a couple of months we had also joined a smaller group, who met weekly.  So we were soon walking twice a week.   It was a great way to explore the beautiful inland region of the Costa Blanca, and also to make lots of new friends.

Because so much of our time was spent walking, this soon became the main subject of posts on our new blog.   We also recorded exploring this part of Spain, including visits to Granada, Seville, Barcelona and Valencia.   But the bread and butter entries concerned the many new walks we were discovering.

We are now on our fourteenth annual blog.   It varies from year to year, but usually I post 50-60 times a year.   Most posts record our walks, and it is too hot to walk between June and October.   For the rest of the year I now post twice a week, because we are now leading two U3A walks each week.

I don’t normally keep a record of blog visits, because the stats are spread between 14 blogs.  But I counted them yesterday and they are quite impressive.   I have posted 755 entries and have had 97926 visits.

Despite these impressive stats, I have had hardly any comments on any of these blogs.   I get a lot of feedback by email, but less than 50 blog comments since I started.   We have friends who run a walking holiday business locally, and they confirm that quite a few of their clients have heard about the area from our blogs.   I was tempted to ask for commission, but didn’t want to lose friends!

These blogs have nothing to do with Napoleonic Wargaming, but I have mentioned them to explain that since 2009 I have been posting three blog entries most weeks, except for the summer months.

And as I shall explain next week, this has not been the full extent of my blogging.