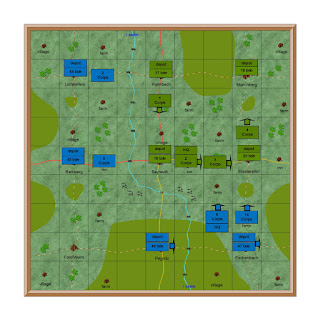 I seem to have lost my focus over the past few months, at least as far as wargaming is concerned.

My long running 1813 campaign has been my sole wargame project for nine years.   Throughout that period there has been a game from the campaign on our wargames table.

It started as a solo campaign, but turned PBEM within a year, and continued as such until 2015.   Throughout that period there were 5 campaign phases running at the same time, resulting in a constant backlog of wargames to be fought.   We had a target of one game every five days.   For the past three years it has been a solo campaign, and I have found that to be just as enjoyable.

During the summer months we tend to play more wargames.  Our two weekly hill walking groups are suspended from June to October.   It is difficult to find the energy to do anything physical during the long summer days, so we spend most afternoon’s at the wargame table.

However even daily wargames are not sufficient to fill the whole day, so I am always on the lookout for a summer project.   In previous years it has been scratch building buildings and scenery for the campaign.   But we completed our last building last summer.

After our summer visitors departed in mid-August I found myself with a lot of time on my hands.  I decided to make a slide show of our walking photographs.   Since we moved to Spain in 2006 we have walked in the local hills twice a week with two local groups.   From the start I published a weekly blog to record the walks, and to keep friends and family updated on what we were doing here.   I usually take about 20-30 photos on each walk, and they were all neatly filed on the computer by year, month and walk.

My project was to make a slide show of each year, with one or two photos from each walk.   I had never tackled anything like this before, but I thought that PowerPoint would be a good vehicle for it.

I mentioned this to a good friends, who is also a very keen photographer.   In the past he has made some really good videos of our walking group summer and Christmas meals, which I had always admired.   So I did not take a lot of convincing when he suggested that he teach me how to make something similar.

I was very keen until he explained that there was very little available for a PC, as most of the new innovation was for IPad.   Apparently my desktop is becoming very old hat.

He offered to lend me his second IPad, which had all of the apps already installed, so that I could try it out.  I was very reluctant, but he was very insistent.   I was soon hooked.

The problem is that I had to learn a whole new technology, and that is not easy when you are a senior citizen.   I was soon caught up in the process and had no time or energy left for wargaming.

Worse still it was soon 1 October, and I had to start organising the twice a week hill walking which is our second hobby.   This involves two whole days in the hills, and a further two days preparing for the walk and then sorting photos and typing up the blog.   However I now also had to make a video of each walk.

Boredom is no longer a problem.    Finding enough hours in each day is.    And that is without finding time for wargaming.

However wargaming has been a central part of our lives for far too long, and I feel guilty at having abandoned my first love for so long.   The current game on the table has been there for almost three weeks, the longest for many years.   Every time I pass I feel a pang of guilt and promise that I will get back to it tomorrow.

I have finally mastered the video production, at least to the degree that I want to use it for our walking blog.   Now I really must get back to wargaming again.
Posted by thistlebarrow at 14:52