Fighting in a Built Up Area (BUA) 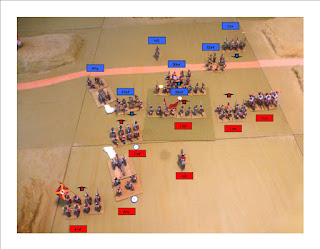 The next move will be critical, and the British will move first
The British commander must decide whether to change his orders
At present they are on Engage.
Cavalry melee are indecisive
Infantry can skirmish and fire, but not hand to hand
If he changes to Attack orders they will be more decisive
Cavalry melee usually end in one side routing
Infantry melee usually similar, but both sides suffer more casualties
And if the attacker rolls a low dice he can suffer heavy casualties and rout
But at this stage of the game it is necessary to push for a decisive result