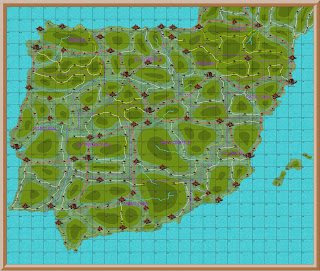 Strategic map of Spain
I seem to spend most of my life making new campaign maps.   I enjoy doing it, it’s a little like basket weaving.    There is a lot of repetitive work, very similar to painting model soldiers.   In fact I seem to have replaced painting with making maps.

Above is my current Strategic Map of Spain.   Each square is 15 miles and shows the area covered by one days march in the campaign.   Each square has a named town or city, which becomes the objective of the campaign phase.   This map is only used for planning purposes. 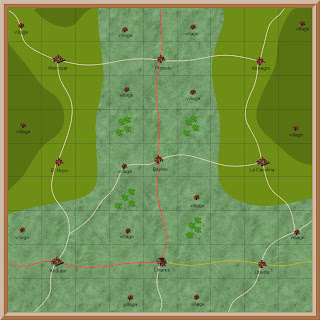 The problem with these maps is that apart from town names and rivers, all other terrain has to be made up. 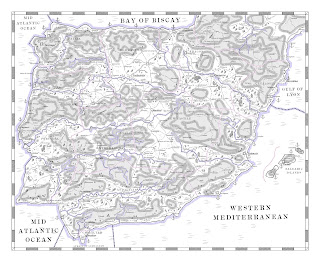 Malcolm Map of Spain
Many years ago I discovered the campaign maps produced by Malcolm McCallum, which I think were called Murat Maps.   I contacted him and he confirmed he was happy for me to use them for my campaign.    These maps covered the same area, but unfortunately not the same scale.   His maps use one campaign day to move from town to town.

They had the great advantage that they showed the terrain I was missing, though not sure how accurate it was.   Even more important they showed national borders, including the minor European states. 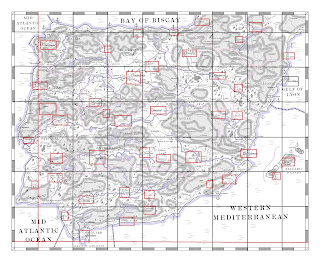 To use this map in my campaign I had to use a grid system.   I started by using three of the bars on the map surround.   Each of these would become one square on my strategic map.   I highlighted one town in each square to be the campaign objective. 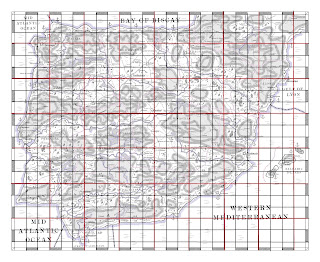 I then drew a second grid, using each of the bars on the map surround.   Each of these would become one square on my tactical map, and also one scenic square on my wargames table. 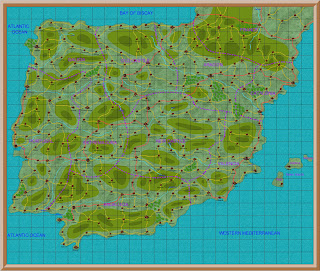 This is my new strategic map.   This is copied directly from Malcolm’s map.   I will now have to add towns in each of the empty squares, so that each square has a campaign objective.   I will then have to compare it with my current map to ensure that all towns used in previous campaigns are still named.

Using this system I will eventually be able to cope all 21 maps created by Malcolm, or at least as many as I need to cover my campaign area.   I will then be able to create a map of Europe with the same detail as each of the strategic maps.

Should keep me busy for a couple of months at least.
Posted by thistlebarrow at 17:11