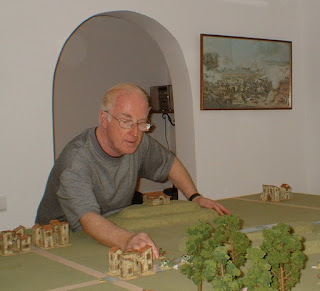 
We both worked full time until we moved to Spain.  In fact I finished work on the Thursday and caught the boat to Spain on the Friday.   So not only did we have to adjust to retirement, but also to leaving behind our social life.   Whilst working we found that one evening a week devoted to wargaming was sufficient, though I did paint most days for an hour or so.

I found the most striking adjustment was having every day completely free of commitments, and being able to fill them up with whatever you felt like doing.   For a couple of weeks I felt quite guilty for “having” to do anything.

We quickly joined the Costa Blanca Mountain Walkers, which accounted for one day.   What I used to call “personal administration” when I was in the army took another two days.  That left us four days free. 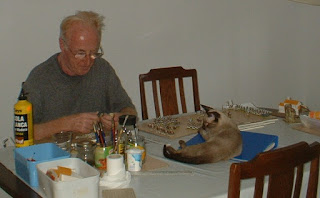 In those early days I still hoped that we might be able to either join, or form, a wargames club.  That would allow us to wargame and make new friends at the same time.  Unfortunately that did not develop.   So we started by allowing one full day for wargaming.   This worked quite well for a couple of months.   But we found that we did not want to spend a whole day wargaming, and gradually changed to an hour or two most days.   We found this suited us much better and continued to do so.

Having so much time to game we found it increasingly difficult to come up with new ideas.   One early solution was to refight historical battles.   In 2009 we started with Wellington’s battles in the Peninsula, and wargamed each of his battles, concluding with Waterloo.   I started a blog to record these games, as I hoped they might prove useful to other wargamers.

When we finished Waterloo I tried to do something similar with Napoleon’s battles.  But they were much larger and required too many figures for my wargames table.   I did experiment with his Italian campaign, but it never developed.

In April 2009 I also started my 1813 campaign.   This was designed to provide an endless supply of interesting battles to wargame.  It proved much more successful than the refight of historical battles.   We are currently gaming the 269th battle in that campaign.

I have written quite a lot about that campaign on this blog, and I will not repeat it again.  However if you would like to know more just select Label 04 on the right and look through the posts.

I always knew that wargaming and hill walking would play an important part in our retirement.  But I had not anticipated how important blogging would become.   To conclude this series about our life in Spain I will outline my introduction to blogging next week.
Posted by thistlebarrow at 11:59