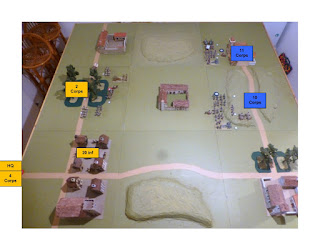 The wargames table is back in normal mode – it has a game set up ready to play.    We are still finding it difficult to get back into our normal routine, and the wargaming has suffered.   Mostly due to the new Garmin satnav I mentioned last week.

But at least the game is set up, and last night we played two moves 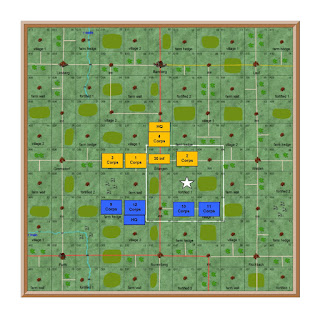 Battle of Erlangen – Campaign Map
This is quite an unusual battle for us, because it is fought as two wargames.

Our wargames table is three squares on the campaign map. However this battle covers five squares, so it will have to be fought as two wargames.   The white outline is the area of the right wing battle, the left wing will be three squares to the left.

Normally I would manoeuvre the two armies to concentrate into three squares.  But this is day eight of the campaign, three battles have been fought and both sides have battle casualties.   The Bavarian Army has lost two of the three battles.   But they are better supplied and want to force a battle before the Austrian Army can resupply and reorganise.

These mid campaign battles are much more interesting because of the casualties from previous battles.   Even when a corps has rested, resupplied and been reinforced each brigade still carries 10% casualties.   Such brigades are much more fragile in morale tests, and less effective in firing and fighting.   So numbers alone are not so significant.

It’s good to be back into wargame mode, and at least I don’t feel guilty when I pass the wargames room.
Posted by thistlebarrow at 12:20