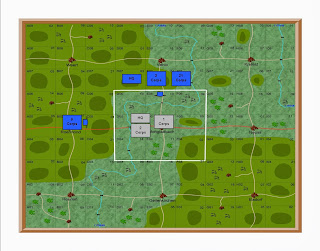 This week’s problem is how to tackle uneven battles in the PBEM campaign.

With twelve players campaigning over six different campaign areas there are a lot more battles produced than previously.   In addition there is the new problem of uneven battles, where two corps attack one.

We wargamed two or three of these battles, and found that the wargame was predictable and pretty boring.   The player with the smaller side simply started to retreat before the attacker could pin them.

I tried making the weaker side hold their position, but this resulted in the destruction of the weaker side.   The mechanics of the wargame being that the greater number quickly cause more casualties, which increases the odds in favour of the attacker.

I then tried to avoid such battles, by allowing the smaller force to retreat.  This seemed a perfectly reasonable solution.   I feel that most corps commanders faced with such odds would do so, if it were possible.   It has always been possible in the campaign, because such battles tend to be by accident, not as the result of a clever strategic move which cut the retreat of the smaller side.

However this was unpopular with some of the players, particularly those with the larger force, who felt it was unfair to allow the weaker side to retreat.

I then went on the wargames forum to ask if anyone had found a solution to this problem.   Perhaps there is a rule set which allows uneven combat, and I could adopt it to my rules.   Or perhaps someone running a campaign had found a solution.   The answer appears to be no.    There does not seem to be an easy way to fight a wargame at odds of two or more to one.

So back to square one.

The campaign is designed to provide interesting battles for Jan and I to wargame.   I then post a full battle report, with photographs, so that each player can see why he won or lost the battle.   They are less keen on a fictional report on how the uneven battles were resolved.

I am not sure that there is an answer that will satisfy everyone.  But it is good that it has made me question the campaign rules and how it is fought.   Even if I fought each uneven battle as a wargame there would still be dissatisfaction because the weaker side would escape without any damage at all.   And there would be little point in fighting a series of wargames where one side is doomed to destruction right from the start.

So no easy answer.  But an interesting problem.
Posted by thistlebarrow at 11:14