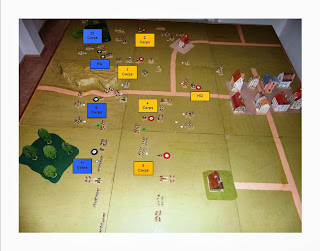 We have fought more campaign battles than usual in the last three months, mainly due to our new campaign system of six campaign areas each with its own French and allied armies.  In that time we have fought 16 battles. I tend to take on the attack role, and Jan the defence.  So I have had a lot of experience of the disadvantages of mounting an attack.

When I designed the campaign I gave all twelve armies the same order of battle.   Four corps, each with four infantry brigades and one cavalry brigade plus one artillery battery.   The command, combat and morale ability differ a lot between the different nations, but the numbers are the same.  This is to allow each player an equal chance of winning in his one of the six different campaign areas.

I have found two particular problems in being the attacker.   First you have to move more brigades more often, and this puts you at a distinct command disadvantage.  In our rules each corps gets one command point for each brigade which is not shaken or in rout, plus three for a gifted commander, two for average and one for poor.   Fine if everyone is halted in defence, more difficult if everyone has to advance, and orders changed.

The second is the luck of artillery fire.   We roll one two D6 and require 8 for a hit at long range.   It’s essential for the attacker to cause more casualties on the defender before it comes to close quarter combat, particularly as the defending guns only require a total of 6 at close range.

The attacker also has to be careful not to lose cavalry casualties, or worse still a cavalry combat.   There is only one cavalry brigade per side, and if the attacker is left with no cavalry his infantry have to form square against the enemy cavalry.

One solution would be odds of two to one, by only attacking when one side has two corps against one.   But this always results in heavy casualties to the weaker side.  Consequently it always retreats off the table before the attacker can close and destroy them.

I am working on a reorganisation of the orders of battle to allow more options.

I am still working on the details, but I hope to introduce this new system at the start of the next segment of the campaign.