Rivoli and the valley of the river Aidge

We have just fought our battle of Rivoli as part of my Wargames Campaigns of Napoleon series of campaigns.   It was not our most enjoyable wargame, too many high and low dice.   But it did make me realise what a good decision it was not to attempt to refight Napoleons battles as wargames.   The campaigns are based on Napoleons campaigns, and some of the battles will bear the same name.   When they do I will attempt to make the wargames table similar to the historical battlefield.   But it is not an attempt to refight the actual battle.

We know Rivoli very well, having spent two weeks at Lake Garda exploring the battlefields in 2000 .   We spent two days walking around the Rivoli battlefield so we know it particularly well.  You will find the blog of our visit here

The town of Rivoli is on the left of the photo above.   The Austrians approached in three columns.   One along the river, one through the mountains above the town and a third on the left of the photo.   It was a very confused battle.   A small body of French held the town at the start of the battle, and fought to prevent the three Austrian columns from joining forces in the town.   French reinforcements arrived throughout the battle, and were fed in piecemeal. 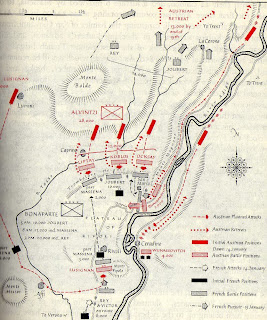 Map of the battle of Rivoli

You will see from the photo, and this map, just how difficult it would be to recreate this battlefield on the tabletop.   Particularly so with the sort of modular terrain scenery which I use.   And even if you could create the high mountains how would you actually wargame on them.

Having walked bout the Trombalore Heights and Mount Baldo itself it is clear to me that there were actually two battles being fought at the same time.   The well known one is the battle for possession of Mount Baldo.   Due to the very limited space this would best be fought as a skirmish wargame.

The fighting around Trombalore Heights is much easier to recreate on the wargames table.   It is a long, and not very steep, ridge.   Similar to the sort of ridge often used by Wellington.

The map seems to indicate that all of the fighting was done on flat open ground south of Mount Baldo.  But in fact all of the critical fighting took place on the mountain itself, which dominates both the town of Rivoli and the whole area between Lake Garda (off map to the left) and the river Adige. 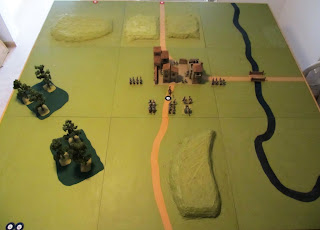 Our wargame table at the start of the battle of Rivoli

This is the table I used for my wargame of the battle.   The river Aidge is to the right.   Mount Baldo is represented by the hills either side of the road leading to Rivoli.   Trombadore Heights is the small hill to the left of Mount Baldo.

It does not look much like the actual battlefield, but was as close as I could make it with the terrain available.   The wargame opened with one French division holding the town, and another arriving as reinforcements.   The Austrians cleared the hills before the French reinforcements arrived, so there was no fighting for the heights.   And a run of poor dice resulted in a quick French defeat.

So Bonaparte lost the battle of Rivoli!

The French have now retreated to Verona, and I am hoping that they will have a run of good dice in the next battle.   Otherwise Bonaparte will lose the whole Rivoli campaign.   Historically there were four Austrian attempts to raise the siege of Mantua, and this is only the second.   So if the French do lose I will have to ignore the result to carry on with the campaign.

This is not really a problem.   My declared ambition is to refight the campaigns of Napoleon as a series of mini campaigns designed to produce good wargames.  My French infantry are all in 1812 style uniforms.   My battlefields are limited to 21 scenic boards.   And the battles are all fought with similar sized armies.   So having distorted history so much already, disregarding a defeat in one mini campaign in order to keep the historical campaign on track is not really a problem.

If you would like to follow the Wargame Campaigns of Napoleon blog you will find it here
http://wargamecampaignsofnapoleon.blogspot.com/
Posted by thistlebarrow at 12:29