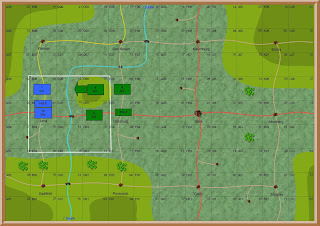 Campaign map at start of battle

The campaign has gathered pace, and presented me with two battles and a difficult decision.

There is a ford in square C06, but the Russians would have to cross in column of March and would be disordered during the move in which they cross.  They would be within artillery range as they did so.   The French could attack with two divisions as 4th division was still in disorder crossing the river. 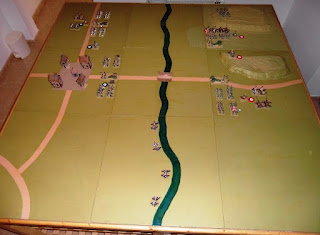 It was clear to me on the map that the Russian attack was doomed to fail.   It was also clear that the Russian commander should have attacked Jena with all three of his divisions, as ordered by his CINC.   And when you look at the table at the start of the battle this is even more clear.

However these decisions are taken by the corps commander, not by me.   But I have to fight the wargame, and I would not sacrifice a division to no good purpose.   To do so would have a serious effect on the campaign and at the very least would result in the Russian Army losing its current advantage. 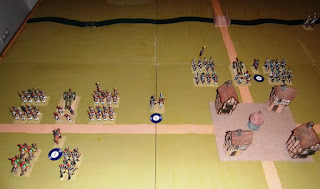 When I put the figures on the table I realised that the French division holding the ford was in fact the Imperial Grade!   The Russian commander was not aware of this when he ordered the attack.

I have asked for confirmation of the orders, pointed out the odds of two to one and advised that the attack is almost certain to fail.   He wants to carry out the attack to support his fellow commander who is attacking Bad Kosen.

The two alternatives are to put 4th division on hold and abandon the game, or use my initiative and move the attack to the south.    The Russian commander is not aware whether there is a ford in C04, but he can see that there is a French cavalry brigade doing a recce to find out.

My dilemma is how much I should influence the outcome of the campaign.   Given the often casual approach to the campaign by some players I am reluctant to allow one of them to ruin the whole campaign, and the other players enjoyment, by insisting on an attack which is at best ill considered.
Posted by thistlebarrow at 09:52