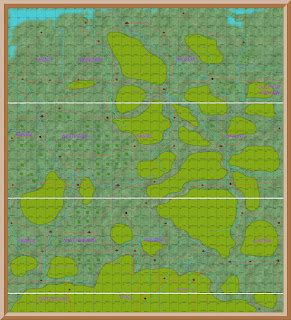 New map of all of Germany
This is the master map for all of Germany.
It covers an area 928 miles wide and 480 miles deep. Each square is 15 by 15 miles, which is one days march in the campaign and the area covered by the wargames table. Each square has a reference number
This map shows main geographical features, plus the major cities and the strategic roads between them. These red roads are the main communication links, and will dictate campaign objectives.
The white lines divide the three campaign areas of Northern, Central and Southern Germany.

Map of Northern Germany
This is the new map of Northern Germany.
It covers an area 928 miles by 480 miles, and each square is 15 miles by 15 miles. The grid system is the same as for the map of all Germany, and the reference numbers are the same.
The area covered is slightly larger than indicated in the larger map. This is to allow a slight overlap to make it easier for campaign purposes.
Major towns have been added, and the main roads connecting them shown in yellow. It is now more obvious where the main strategic towns lie.
The next step is to make similar maps for Central and Southern Germany.
But before then I will have to start making maps for the next phase of the campaign. This will involve three new maps.
First will be a strategic map similar to the above, but covering a much smaller area. On this map will be plotted the rest of the towns, and the minor roads which connect them.
Then a tactical map which will be used for campaign movement. In previous campaigns I have only had one such map. It was used for player movement, and also to set up the wargames table. But for the next campaign I will make two. One will be for use by the players, and will look like the above. The second will cover the same area, but will show the scenic squares to be used on the wargames table.
Posted by thistlebarrow at 22:23