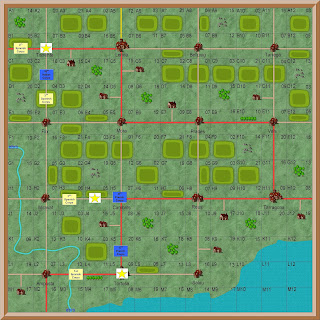 It has taken 10 moves, and two months, to arrive at the first campaign battle. This is mostly because I have changed the campaign rules to allow each corps commander more freedom of choice, and they are all being somewhat cautious. Perfectly understandable, but it has meant that Jan and I have not had a campaign wargame to play since November.

The first battle, at Torrente, is the result of 16th Italian corps advancing to relieve the garrison at Flix, and being confronted by 3rd Spanish corps, and 4th Spanish corps about to cut their communications with Torrente. The Italians then have to carry out a hasty withdrawal to avoid being cut off. The battle started on Move 10.

The garrison of Miravat belong to 17th French corps, who have left a small garrison at Tortosa to raise the siege of Miravat. When Suchet hears of this he orders them to return to Tortosa and leave the relief of Miravat to 8th French corps. They arrive back at Tortosa just as 1st Spanish corps is about to attack.

This posed a problem for Jan and I how to fight the wargames. We were already fighting Torrente when the second two battles were declared. Obviiously we will have to finish that battle first.

The second two start at midday on 10 August. This means that there will only be 8 hours/wargame moves to nightfall. So if the first battle is not resolved within that time we will have to decide whether to clear the table and fight the second, or carry on with the first battle for the next day.

To keep the campaign and wargame in the same time frame each day is 12 hours and each wargame 12 moves. So one hour is one move. Each campaign move is four hours. This was done to allow nearby commanders move to join a battle if they wanted to. If the battle/wargame starts at 0800 in the morning, then there are 12 wargame moves. Quite sufficient to resolve a wargame. But if they start at 1200 there is only 8 moves, not really long enough.

We will just have to fight the three wargames and hope that all three result in a clear winner and loser. Otherwise we will have to leave it up to the corps commanders and if necessary relay the table to fight a second day or one or more battles.