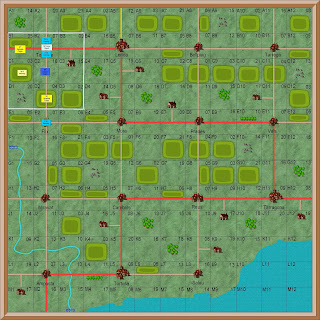 
It has been a long wait for the first battle of our PBEM Spanish campaign, but it looks like it will have been worth the wait.

We have completed nine campaign moves, over four weeks plus two off for Christmas, and have finally produced a battle. And its quite a complicated one. The Spanish have laid siege to an Italian brigade in an isolated village.

General Severoli, the Italian corps commander, ignores his orders to hold Lerida and marches to relieve the garrison. As he nears the village he finds the way barred by a Spanish corps, and receives reports of a second Spanish corps moving to cut his communications with Lerida. To add to the mix a small band of guerrillas have set an ambush. Try transferring that lot from the map to the wargames table!

As the wargame starts Severoli has ordered his rear guard to abandon Torrente and his main body to retreat accross country to join them on the Lerida road just east of Torrente.

To ensure that the Italians do not just outmarch the Spanish, I have stipulated that they must hold at least one square of the wargames table until nightfall. The game starts at first light, so there are 12 hours/wargame moves to nightfall.

Nothing is ever predictable with our wargame rules, but I am hoping that this game will live up to its early promise.

The battle/wargame plays an important part in the PBEM campaign, so I take photographs of each move and write up a move by move battle report on the Campaign Diary Blog at the rate of one move each day. This gives Jan and I plenty of time to fight the wargame, and keeps the corps commanders involved in the progress of the battle.