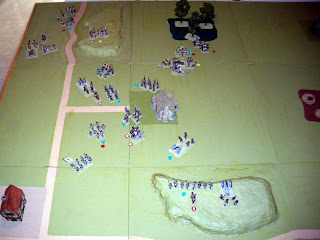 Table at the end of the second battle of Peine

The second battle of Peine has ended in a decisive victory for Prince Blucher.

Neither Davout nor Blucher expected to fight again on 5 August 1813. Having been beaten on the previous day Davout was retreating towards Celle. Blucher allowed his weary corps to rest during the night and ordered a redeployment at first light. He intended to send one corps to follow Davout to Celle, a second to take Hanover and a third to hold Peine. He was aware that IV French corps was at Brunswick, but he expected them to retire when they received news that Davout had lost the battle and was retreating north.

At first light IV French corps marched west from Brunswick to attack Peine. This unexpected move caught the Prussians by surprise, but they quickly recovered and deployed to meet the threat.

Davout immediately halted his retreat to Celle, and brought his two weak corps back towards Peine to support IV corps.

This shattering defeat has left the road to Hanover open to the Prussians, and must signal the end of the campaign. It is now no longer a matter of who will win the campaign, but how badly the French will lose.