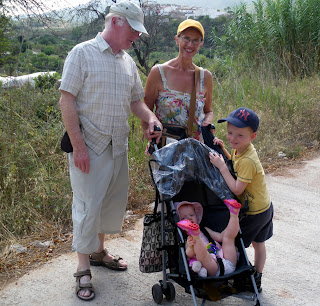 Our son and his family have just returned home after a two week stay. It’s been delightful having them with us, but it has greatly reduced our wargaming activities. They visit each year, so they do not require us to show them the local sights. And most days they went to visit one of the local beaches.
With two adults, one four year old and a one year old our relaxed daily routine goes out of the window. They take over the house and we just fit in around them. I sneak into my office for half an hour on the computer when I can, but I made the mistake of showing the four year old a “Ben 10” game on the computer (don’t ask who Ben 10 is) and since then every time I try to get on the computer he follows me and we have to play one of his games before I can check my emails.
Despite this I have managed to keep the campaign going. We had set up a campaign game just before they arrived, and most days we managed half an hour in the wargames room for one move at a time. The one year old had her cot in the games room, so we had to fit our game moves around her regular sleeping periods!
This was the game which prompted the Poor Commander debate mentioned in my last blog entry. There are three Prussian corps, one with a poor commander, against two French corps both with Average commanders. So the Poor Card would strike the Prussian army each time. The penalty for the Poor Card is that the poor commander would have to change his orders to Halt.
The game is not yet finished, but is proving quite a challenge. I have the Prussian army, and Jan the French. With our rules, indeed most wargame rules, odds of three to two would normally result in a pretty one sided wargame. However this Poor Card has made it really difficult for me as Prussian commander.
The commander in chief can take command of the poor corps, and thus avoid the Poor Card penalty. But if he does so, he can not then issue orders to the other two corps. After a frustrating start to the game, when the poor corps halted out of artillery range of the French, Blucher took personal command of the poor corps. The Prussian attack stalled, and the French withdrew out of artillery range. The poor corps was committed to an attack on its own, against two French corps.
To hand over command to the poor commander would take Blucher three command points. During three critical moves he only had five command points. So if he handed over command that move would effectively be lost for both the poor corps and Blucher himself. And it was very likely that the Poor Card would immediately cause the poor corps to halt – within range of the French.
An interesting problem and a surprisingly enjoyable game. I am still not sure about this Poor Card and whether we have the balance right. But it has certainly given me food for thought.
Posted by thistlebarrow at 12:30