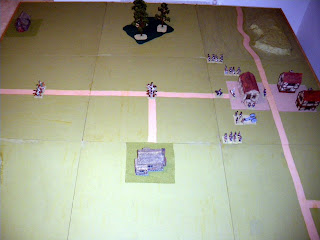 Typical battle at start of move 1
Its good to be back into the campaign and it seems to be running quite smoothly. We have completed 20 moves and fought four battles. The fifth battle is just starting and you can read about it on the 1813 campaign diary – link under My Blog List opposite.
The campaign rules are still in an early stage of development. They are the third edition and have been developed over three PBEM campaigns. At the end of each campaign I update them to cover lessons learnt.
At the start of this campaign one move was one day. This created problems with reacting to enemy moves, concentration and “marching to the sound of the guns”. To overcome this I changed it to three moves per day. Movement rates are the same, but players have the opportunity to react to events three times during the day.
This has worked well. But as often happens you solve one problem and create another.
Each map square is one scenic square on the wargames table. The table is three squares wide and three deep. In effect the table is one days march on the map.
It’s critical that when the map is transferred to the table, there is sufficient space between the two armies to fight the battle/wargame. The ideal situation is that they both enter the table from opposite ends. They then each have one square to deploy, leaving one empty in the centre. Each square is 24” square, slightly longer than maximum artillery range. When they are deployed they move towards each other and fight in the centre 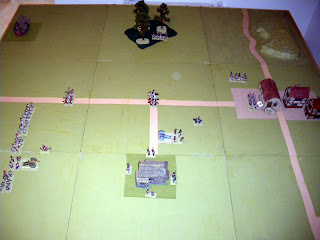 
If one is in defence and the other attacking, I usually set the defender in either the right or left square. The attacker then has his nearest square to deploy, and the centre one to move through to attack. This allows the defender to inflict artillery casualties as he moves through the centre square.
The problem arose when one commander wanted to start a battle at 1200, rather than 0800. On the map there was only one square between him and the defending corps. So he would start the battle in the left hand square, in column of march, with only 8 hours/moves to fight the battle.
All of my campaign games are 12 moves. This is the 12 hours campaign time. One campaign move is 4 moves/hours. In most battles the first campaign move (four table top moves) is spent marching the attacker onto the table. The next campaign move (four more table top moves) is spent deploying into column of attack or line. The third campaign move (final four table top moves) is the actual close combat battle.
If the battle starts at 1200, or worse still at 1600, there is just not enough time to move onto the table, deploy into an attack formation and close with the enemy. 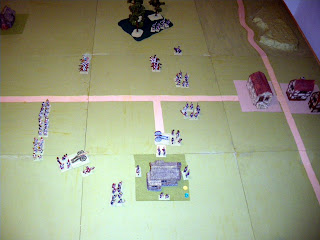 Typical battle start of move 9
I don’t want to say a corps commander can only start a battle at 0800. But I don’t want to have to set up a battle/wargame, spent 8 moves crossing the table and then have a night move when the defender can just march away.
So I am working on a skirmish type engagement for corps who wants to attack later than 0800. First the attacker will have to deploy his corps from column of march (a formation which can not fight) to column of attack. This will take a full move. He can then attack the enemy with just one infantry brigade, and that will be fought under infantry skirmish rules. It will be done as a paper exercise, not on the table top. If the attacker still wants to attack, he can do so at 0800 next morning.
It all seems reasonable in theory, but I will have to see how it works out in practice. I have learnt from bitter experience that there is often a great deal of difference between one and the other.
Posted by thistlebarrow at 11:48