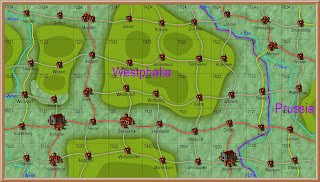 Just finished the last post on the PBEM Test Campaign Blog. Its a summary of the campaign, showing the position of each corps each day. The campaign diary part of the blog has been quite difficult, trying to explain what is happening without giving too much away. As all the PBEM players were following the blog I had to be careful not to use anything which they did not already know. So I felt it would be useful to do a diary as the final summary, showing what happened day by day. If you would like to read it you can find it here

http://pbemhannovercampaign.blogspot.com/
The final battle/wargame of the campaign was a real "cliff hanger". It lasted the full 12 moves, and could have gone either way right up to the last move. At nightfall the Prussians were in possession of Colbitz, so I had to appoint them the winners. But both sides had suffered heavy casualties, and it would have been interesting to see what the two CinC players would have done had the campaign continued.
I was tempted to continue, but I feel I have learned all that I can from the test campaign, and am anxious to have a go at a "real campaign". So its back to my 1813 campaign, but this time as PBEM rather than solo.
I have already started the new campaign. It is the sixth phase in my 1813 campaign, and the second one set in northern Germany. This is where the very first phase was set, when Blucher crossed the river Elbe, defeated Davout and took Magdeburg. The new campaign gives Davout his chance of revenge, and Blucher the opportunity for fresh glory, as they fight over Hanover.
Apart from providing the maps and rules, and setting the objectives and campaign area, I have had nothing to do with the deployment of the two armies. Its interesting to see how the two CinC players have opted to tackle the task. The CinC orders have been sent to the eight players and I am waiting for their corps orders in return. I find myself poring over the umpire map as each set of orders arrives to see where the first contact will take place. Its SO much more interesting than doing it solo.
The blog for the new campaign is here