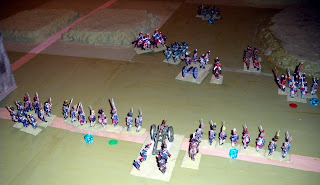 
Although most of this week has been taken up with the new PBEM campaign, my solo 1813 campaign is carrying on in the background.

Jan and I have just finished the first battle of the Valladolid mini campaign, and Wellington has lost. I was Wellington, and I had the best of the four corps - including the Light Division. So I was pretty confident that I would win. In the end it was down to a bad dice throw - or so I keep telling myself.

Those of you who have been following this blog, and the 1813 campaign blog, will know that it is a feature of my wargame rules that the dice plays an important part. For someone who likes to think he is recreating the feel of a Napoleonic battle it may seem strange that I actually enjoy the random result of a dice throw, but it adds such a lot to our wargames.

It can spoil a good game if one side rolls too many bad dice, and that has happened. But when it does Jan and I usually agree to regame the whole battle. There is no fun, or enjoyment, in winning just because of excessive bad luck. But I enjoy the luck element in our rules because right up to the last move of a game the whole thing can turn on its head.

Many wargamers seem to be obsessed with trying to recreat the tiniest details of a battle or a tactic. Endless discussion takes place on TMP about how to recreate minor tactics, and some get very heated indeed. Yet anyone with any experience of military service, or even experience of wargaming, must realise that wargames could never hope to recreate more than a passing resemblence to actual battle.

Or perhaps its something to do with progress through stages of wargaming. I often find that older wargamers hark back to the fun of simple wargames like they were "in the old days". I am not sure that they ever were that much fun. I can well remember trying to find the "holy grail" of wargame rules - and always failing. My taste in rules has gone from the fun of "Charge" to the mind boggling charts and concepts of WRG, and back again to the fun and unpredictable rules we now use.