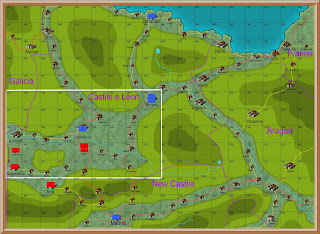 
It is a great relief to be starting a new campaign, and the prospect of new wargame, after all the weeks I have spent working on the ProFantasy maps for the 1813 Campaign Diary.

This will be the fifth phase, and deals with Wellington's attempt to take Valladolid. When this mini campaign is completed I will have fought a campaign in each of the five campaign areas, and will have used all of our 28mm soldiers to do so. That was the aim of the whole 1813 campaign. I had planned to use the three different scales, but have only used the 28mm figures so far. This is partly because they are easier to photograph than the 15mm or 6mm.

It is the first time I have used the 28mm figures for a few years and both Jan and I found that we really enjoyed seeing and using them again. We have also found that each mini campaign was fought without all four corps on each side joining forces. So we could fight them quite easily on our table in 28mm.

I am not sure what will happen when the Valladolid campaign is completed. Whether I will start a new campaign, or whether I will just carry on with a second phase in each of the campaign areas.

Meanwhile the new campaign is under way. The first entry is the background to the campaign. The second the Anglo-Portuguese army order of battle. The third will be the French order of battle and then the battle reports.