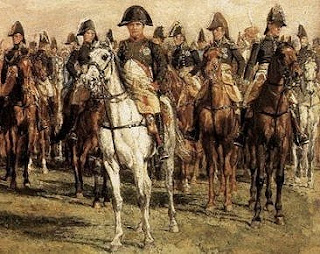 I am really pleased that I have received eight requests to take part in my latest project to turn my solo 1813 campaign into a PBEM campaign. This response have convinced me that there is sufficient interest, so the project will go ahead.

I ran two PBEM campaigns last year with this intention. They were fun to run, but I was not convinced that they would offer sufficient interest to the players to make it possible to keep it going as a long term project. This was partly due to the maps I was using, and partly because I was not really prepared to create a new set of campaign rules.

Now that I have the ProFantasy maps I can make, and amend, them as required. This should make it more user friendly for a PBEM campaign.

The rules are a different matter. I have no campaign rules at present. I am umpire, CinC and all the corps commanders. I just move the symbols around until I get a suitable battle to fight as a wargame. My only interest is in the wargame, so the mechanics of the campaign do not matter.

However a PBEM is a different matter entirely. The players satisfaction comes entirely from the campaign, so it must be challenging and fun. It must also make sense. So before I can start a PBEM I will have to develop a set of rules.

I want them to be similar to my wargame rules. They should be easy to learn, provide Napoleonic command challenges and not require too much commitment from the players. It sounds quite easy, but it very difficult to achieve.

One of the biggest problems with PBEM, apart from players disappearing without any notice, is when a battle has to be resolved. I plan to overcome this by running a blog on the campaign. It will be similar to the campaign diary for my current solo campaign, but will have to avoid giving too much information as both sides will be reading it.

I plan to post a summary of each campaign days progress. When there is a battle to be fought I will post a move by move report, with photographs and a brief explanation of the rules as they affect the game. In this way the players will be able to follow the progress of the battle, and understand why one side lost. It should add to their enjoyment of the campaign, and will keep them interested whilst Jan and I fight the wargame.

I have posted an out line of the campaign on my PBEM forum, and asked for bids for the role of CinC and corps commanders. The forum will also be used to keep everyone informed of the progress of the rule development and the test campaign once it gets going.