We are in UK this week on grandparent duty. Our son and his wife are expecting their second child, and we have returned to help out with their first child for a week or two. So there has been very little wargaming.

On the other hand the enforced separation from our wargames room and library has given me plenty of time to think – never a good idea!

I have finally finished the tactical maps for Spain. 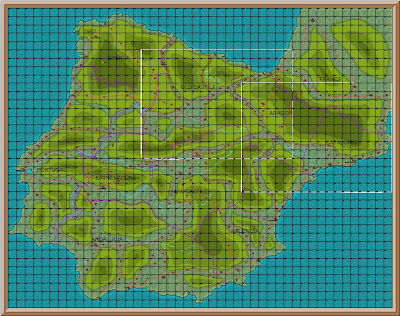 First the strategic map for Spain, showing the area covered by the two tactical maps. 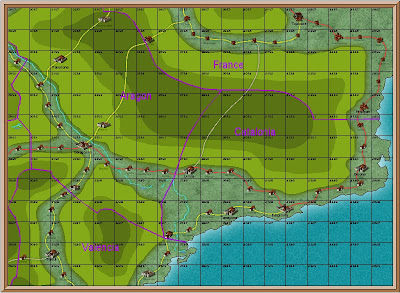 
Eastern Spain covers the area from the French border down to Valencia. This area was held by Marshal Suchet right through the 1813 campaign and only vacated when Wellington’s victory at Vitoria drove King Joseph out of Spain and forced Suchet to follow suit. 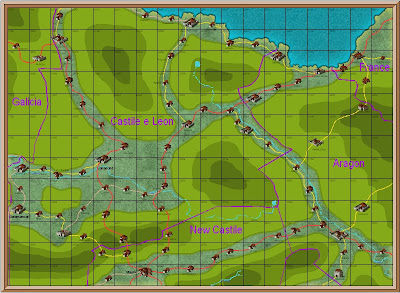 
Western Spain covers the area from Madrid to Bayonne. This was the area of Wellington’s masterful 1813 campaign.

Those of you who have been paying attention will know that I discovered ProFantasy, and started on these maps, after about a year of running my 1813 campaign on hand drawn maps. The aim was to replace my hand drawn maps with these must nicer ProFantasy ones.

This was my aim, but after a week of enforced (Wargame) idleness I am not so sure. I have now printed all six tactical maps on A4 paper, and find that the detail is too small to use with ease. So I am now considering producing four maps for each of the six tactical maps. This would give me much more detail on each map.

But it gets worse.

Having studied the hard copies of the maps I have come to realise that my campaign strategy would have been much different had I been using these maps.

First there is much more correct geographical detail on these maps than my earlier ones.

Then the road system is more historical based than adapting a modern road map. I started by plotting one town in each 20-mile square. I then put in the major rivers. Finally I added the mountain ranges. I then made a new map with only the major cities such as Berlin, Dresden, Kassel, Koln, Strasbourg, Munich and Vienna. Main roads, in red, linked these major cities.

I then added minor cities such as Amsterdam, Hamburg, Ratisbon and Luxemburg. Minor roads in yellow linked these to each other and to the main roads. I found that pretty well all of the medium sized towns were covered by these two road systems.

Finally I added a third road system to represent very minor roads over difficult terrain such as mountain ranges.

All of this detail means that lines of attack, and communication, automatically follow the historical ones. And more important they make small towns or villages important because they mark critical road junctions.

All of this has made me want to refight the 1813 campaign from scratch. But it seems a shame to lose all the work I have done on my current campaign. Particularly as I am very happy with the wargames they have produced.

So now I am pondering two options.

First rewrite the history of the 1813 campaign to date, using the new maps. And carry on with the current campaign once I have done so.

Second abandon the 1813 campaign and start a new one. It might be the historical 1814 campaign, or a new 1814 campaign where Napoleon has drawn at Leipzig. Or it might be 1812 when the Austrians, Prussians and Russians declared war on Napoleon before he could invade Russia.

Like I said earlier. It is never a good idea to have too much spare time to think. Just a few weeks ago I was perfectly happy with my 1813 campaign and the way it was developing. But with the evidence of my new maps in front of me it is becoming very difficult to accept that my current campaign is the best I can do.

And this is one of the great advantages of running the campaign on a blog. Were I running the 1813 campaign for just Jan and I, I could just scrap the whole thing without a second thought. But having gone public on the blog I feel a certain responsibility to anyone out there, no matter how few you may be, who are following it.

It will be interesting, for me if not for you, to see where this review will end up.
Posted by thistlebarrow at 01:03