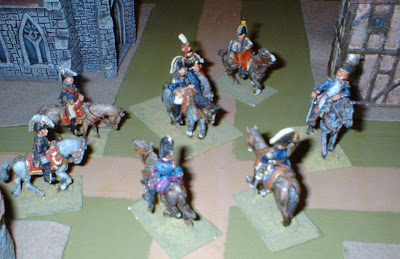 Over the past couple of months we have been trying to solve a problem with our Command and Control rules. The problem is the disadvantage encountered by the attacking general as opposed to the defending one.

I should explain that our command rules rely on each general having sufficient command points to issue orders to subordinate generals or brigade commanders. There are two types of general.

The corps commanders issue orders to their brigades, in accordance with the objective given by the CinC.

Command points are decided on the roll of an average dice. To this is added 1 for a Poor commander, 2 for an Average one and 3 for a Gifted one. So each general will have between 3 and 8 points each move. The better the grade, the higher the likely number of command points.

The corps commander has 6 brigades, plus himself. It costs one command point to move, change formation, skirmish, fire or attack. So it is unlikely that a corps commander will be able to do everything he wants with all of his corps each move, particularly if he is a Poor commander.

Now we come to the crux of the problem. When a commander is in defence he only has to move to counter the attacker, or to fire, skirmish or attack. It is unlikely that he will want all of his brigades to do something each move. So even a Poor commander will usually have sufficient Command Points to do what he wants to do each move.

However the attacking general must move all of his brigades into contact with the enemy, and to do so he must keep himself within 8” (command range) of each brigade he wants to issue orders to. Even a Gifted command will be hard put to have sufficient Command Points to move his whole corps, let along change formation of engage the enemy.

The rules were written with the intention that all initial movement would be on “blinds” (hidden movement), where there are special movement rules. In effect the whole corps can move 8” or 4” for each command point providing they are more than 16” from the enemy and have not been spotted.

Previously most of our games were encounter style, where both armies marched towards each other. However most campaign games tend to have one side defending and one attacking. This makes the problem worse.

For the past few months I have been putting each campaign wargame on a blog, with photographs taken of each move. This is difficult when using “blinds”, so I have been putting the figures on from the start. As a result the approach march of the corps is taking much longer than previously, often more than half of the 12 daily moves allowed.

I have experimented with “corps orders” to try to overcome this, but I am not very satisfied with how they have test played. So I am looking at a different system. My initial idea is as follows.

Any number of brigades can move for one Command Point providing that each brigade is within 2” (close support) of each other, the corps commander within 8” (command distance) of the centre of the front brigade and all brigades perform the same order. If the brigades are side by side the corps commander must be within 8” of the centre of the middle brigade. Multiple moves are only allowed if every brigade is more than 16” from the enemy.

This should allow the corps to move into position and deploy outside 16” of the enemy. It should also allow an attack, providing all brigades are within 2” of each other, to approach the enemy and even engage them.

Whether this will work any better than my previous “corps command” remains to be seen. A new solution it always seems to meet all of the requirements. But each subsequent game often raises new problems. So I will play test this new system for a few games before changing the rules.
Posted by thistlebarrow at 22:13