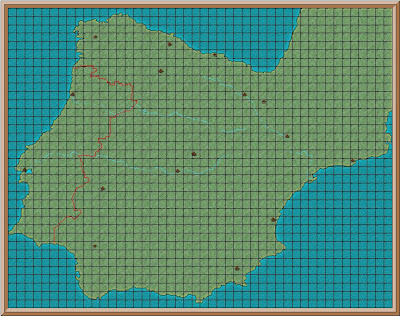 My new map making project has regulated everything else very much to the “back boiler”. We have managed one short wargame, and two quite long walks, but apart from that it has been maps, maps and still more maps. And for all that work I have precious little to show for it.

Most of the leg work has already been done for my previous hand drawn map. I had copied an AA Maps of Europe and drawn on a 20x20 mile grid. So I only had to put a similar grid on CC3 and copy the outline of Spain from my AA maps. Sounds simple, but it was anything but.

CC3 is designed for fantasy map making, and if you want to draw a simple island its easy. However I wanted to draw an accurate outline of Spain. To do so I had to enlarge sections of my map so that I could copy the outline from the AA map. Sounds easy, but you have to be careful not to touch any part of the map with the cursor. If you do so that becomes part of your outline. This happened at least six times, and each time I had to start again.

But the most frustrating part is when you right click to end the outline. When you do that your map suddenly appears in all of its glory. Unfortunately my start and finish line was not quite right, and my map of Spain showed the Atlantic Ocean over a large part of northern Spain! That was when I gave up and went to bed.

You do however learn by your mistakes, and eventually I got the outline to my satisfaction. I then wanted to outline the coastline. There is a tutorial on how to do just that, so it was quite easy to follow. And the result was quite pleasing. But when I next switched on the map my outline has disappeared. Fortunately a kind person on the ProFantasy forum explained that you have to adjust the settings in order for these enhancements to appear, and he did so in such a simple and fool proof way that even I could do it.

The next stage was putting in the rivers. As soon as they got one square away from the coast they suddenly took on a life of their own and made straight for the nearest coast. After a long frustrating hour or two it was back to the forum. Now I was told that you have to disengage a button called “attach” when you select a river. This is designed to allow you to start your river inland and it will make its own way to a suitable coast. Good idea for your imaginary island, but not so good for Spain. My river was starting at Oporto, going inland for 20 miles and immediately making for Corunna. Again easy to put right, but why on earth do ProFantasy put such an option as the default? Surely it would make more sense to only do so if one engages the “attach” button.

The next part was easy. I wanted to put in the regional capitols. With my AA map I already had the correct grid references, so it was easy to do so on my CC3 map. However the font was incorrect. There are about 30 fonts you can choose from, but no way you can see what each font looks like. Again to the forum. It appears you used to be able to do so, but that option disappeared with the latest update. I was assured that it would probably be put back with the next update.

So all in all a very frustrating week. I have seen historical wargame maps made with ProFantasy and they look great, so I am not knocking the system. However it is not exactly user friendly for beginners. I am not defeated – yet. Jan is also struggling with the learning process, so at least we can compare notes. Fortunately we are both very stubborn and determined not to give up.
Posted by thistlebarrow at 21:12