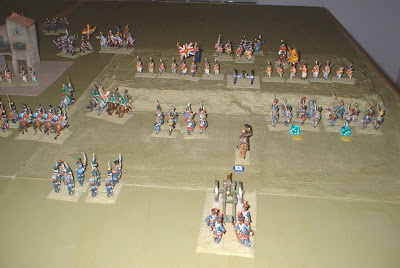 The fourth, and final part, of the Vimiero can be found on the Wellington's Battles blog.

Once again the British won, as they did on the day. However the wargame did not follow the historical one. This had never been the intention, as I have always found it difficult to refight actual battles. The Peninsula battles covered in this series of blogs are more wargames inspired by the original battles, rather than attempts to refight the battle itself.

I wonder whether I am alone in this approach to historical battles? Certainly when I started in wargaming the prospect of refighting Waterloo was one of my main incentives. And from my casual reading of other blogs and various wargame forums this type of objective would appear to be wide spread.

The whole subject of scale of figures, buildings and terrain seems to be a major concern of may wargamers, or at least those who put subscribe to the forums. Grand projects to refight a particular battle are undertaken with lots of publicity, and then seem to disappear long before the project gets anywhere near the tabletop. The only difference between now and then (when I did much the same thing) is that it is now so much easier to make everyone aware of your project due to the world wide web.

I am sure that most find, as I long ago did, that trying to transfer a battle with tens of thousands on each side, spread over a few miles of undulating terrain is pretty well impossible to achieve on a wargames table. And that is before you try to find, or write, rules that will reward correct tactics. And were you to successful what would be the point, you would end up with the same result.

But of course its great fun to make your wargames table look a little like the original, field your model soldiers in a similar order of battle and then attempt to rewrite history. But I do wish more wargamers would admit, to themselves at least, that their game bears no more than a passing resemblance to the original epic it is based on.

I have greatly enjoyed the first two wargames in this series. Both Rolica and Vimiero were relatively small battles fought on compact battlefields. I have visited and explored both. I must confess that my wargame tables bore little resemblance to either, though both had similar terrain objectives.

The progress of the wargame was also very different from the original. This is one of the other problems with refights. Over the years I have found it very difficult to make a wargame follow the original time table. A real battle tends to be a series of small engagements, each of which leads to the next. However wargames tend to be more a matter of moving everyone forward and hoping for the best. Even when we maintain a reserve, it is usually committed much earlier than in real life.

So I have long accepted that it is, for me, more rewarding to create an enjoyable wargame than to try to recreate the actual battle. And certainly so far this series of games has achieved its aim.

You can read the whole battle report here: