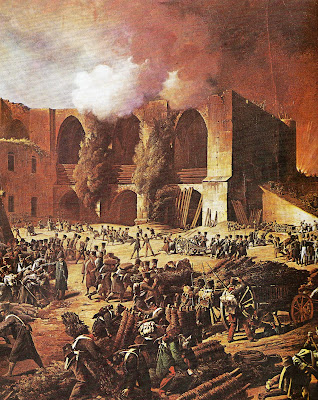 1812 was a very mixed year for Wellington, as indeed it was also for Napoleon. And for both it ended in a terrible retreat. Wellington started the year with the capture of Cuidad Rodrigo, quickly followed by Badajoz. Then his stunning victory at Salamanca, which led to his liberation of Madrid. Then came the siege of Burgos.

Due to variety of circumstances, such as a strong fortress, a determined garrison, a lack of suitable siege materials and a strong French army of relief Wellington would end the year back at Cuidad Rodrigo on the border of Spain and Portugal.

Burgos was the first of our Walking Napoleonic Battlefields for our third visit to Spain. Unlike most of our battlefields the city of Burgos is well established on the tourist trail. The ruined castle was our main interest, but the city also has a beautiful cathedral containing the bones of El Cid.

You can read about our visit here: