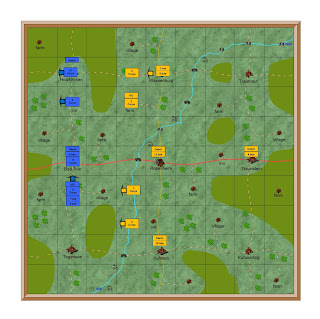 9th and 10th Bavarians corps are forced to retreat west due to their defeat in the battle of Holzkirchen.   At nightfall they receive orders from Oudinot to hold the town at all costs.   Both cavalry brigades are still in rout, but they deploy in and around Holzkirchen as ordered.

In the south Oudinot orders 11th and 12th corps to move north and concentrate at Bad Tolz.   This is his main depot, and its loss would signal the end of the campaign.  In doing so he abandons the town of Tegensee, and the southern bridges over the river Isar.

Despite his victory at Holzkirchen, Schwartzenberg is unable to follow up the Bavarian retreat.   Both 2nd and 3rd corps are low on supplies.   If they move west they will move out of range of their supply depots.   He orders them to halt at Wassenburg to rally, regroup and resupply.   He also orders the depot at Traunreut to move to Wassenburg.

To maintain the pressure on Oudinot, he orders 1st and 4th corps to force a crossing of the river Isar south of Rosenheim.   It is only when he has done so that he becomes aware of the Bavarian redeployment at Bad Tolz.

Schwartzenberg is very pleased with recent developments.  In the early part of this campaign he seemed certain to lose.   His counter attack was more successful than he dared hope.

He has now moved all four corps over the river Isar and is well placed to resume the offensive and complete the destruction of the Bavarian army.

All of this has happened without any influence on my part as campaign manager.

Early success, particularly when there is a river line to cross, leaves the victor very vulnerable as he tries to reorganise his supplies, replace battle casualties and resume his advance.

As the losing army retreats they fall back on their depots.   They also release garrison troops as they abandon towns and depots to the enemy.   Most importantly they have the advantage of concentration.

The attacker has to cross the river line where he can.  This often means that his army is separated by long distances.   The loser, within reason, can retreat and concentrate where he wants.   This is usually in a central position to protect his main depot and main supply route.   He is then well placed to attack the weaker portion of his enemy.

As always a lot will depend on the luck of the dice on the wargames table.   But attrition and supplies in the map campaign will always reduce the options of both commanders

We now enter the most interesting phase of the campaign.   Due entirely to campaign circumstances we have two campaign areas, each with two corps per side.   They are too far apart to concentrate for a single battle.   The campaign will be decided by the next two battles.

As always the map campaign will be decided by the results of the tabletop game.   If the Austrians lose the next two battles, they will have to retreat and the advantage will move to the Bavarians.

But campaign casualties will play an increasing role in the outcome of the tabletop battles.   Already all four corps have considerable casualties.   About half of the brigades start the battle with casualties.   The more battles they fight, the more brigades which will be affected.   Thus the more that each corps will have very brittle morale, and likely to break if forced to take morale when a nearby brigade routs.

I have no idea what will happen next, and that’s what makes me such a confirmed advocate of campaign games.

This has been a bit of a roller coaster of a campaign ... and still remains in the balance.

It's been very interesting to follow events as they have unfolded, and I look forward to seeing how it ends.

I am also looking forward to seeeing how it ends. Both armies have a lot of battle casualties, which makes their brigades very brittle when they have to test morale. So it really could go either way

As you said in your previous post, this has really swung Paul. Is momentum irreversibly with the Austrians, or are there a few more twist, turns and swings of momentum to come? We'll find out more in your next post!

After a battle the losing side must retreat at least one map square.
The winning side must halt and rally.
If the winners are in supply they can then attack again the next day
A corps has to be stationary for 24 hours to rally
So in this case the losing side will not have had a chance to rally routed brigades
They are almost certain to lose the second day of battle

They will normally reteat again to avoid battle
But in this case the Bavarians are too close to the edge of the map
If they retreat again they will move off the map, and cannot reenter this phase

If the Austrains lose the next two battles, they will have to retreat
Thus they will lose the initiative again.

Hope that all makes sense?