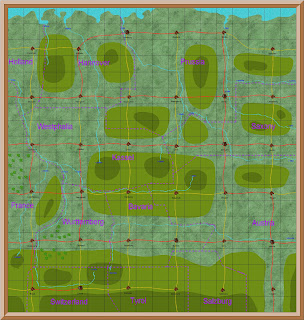 This week I completed the strategic map of Germany.

Each square on this map is both one days march (if on a road) and a wargames table.

So there are nine squares on this map to one square on the grand strategic map of Europe which was the subject of last week’s blog.   The centre square is the city which would be the campaign objective.   Each of the other eight squares would have a town.   All of these towns are shown on the campaign master map, but would make the map look too cluttered on the blog.

Again this is a purely practical map.   It is not designed to look pretty, nor indeed to look much like Germany.  As in the map of Europe, this map is produced for campaign movement.   Large areas of Germany have been left out.   The coast outline is similar to the actual coastline, but again last sections have been left out.

Rivers are reasonably correct, but again have been altered to suit the overall concept of the map.

Hills are designed to make the campaign terrain more interesting, rather than to show actual terrain.

The project for next week is the strategic map of Spain.

Posted by thistlebarrow at 17:29 No comments: 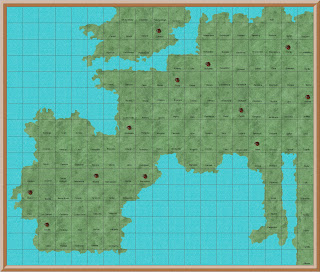 My latest project is to make new maps for the campaign.

Map making has never been my strongest ability, though using Profantasy to produce the maps helps.   I have always used a AA Road Atlas of Europe to plan my maps.   I drew a grid over the maps each square representing one days march.   This was then the basis for all the subsequent maps.

However the maps themselves had to be hand drawn, using Profantasy.  And I have always been poor at drawing.  I am ok with the straight lines, but lack any artistic skills at all.

So distances on my existing maps are more or less correct.   This leaves large areas not suitable for campaigning, and thus unnecessary for a campaign map.

So I am now making maps designed for the campaign.

The map above is the grand strategic map for the campaign.   Each square is a campaign area.

In the campaign each square will provide a mini campaign, similar in scope to the Waterloo campaign.

The map is not very pretty, but it is very practical.

Posted by thistlebarrow at 12:02 No comments: 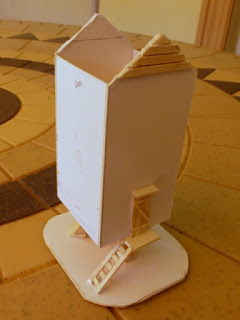 Having completed the windmills for Spain and Portugal we wanted one to feature in our battles set in Germany. 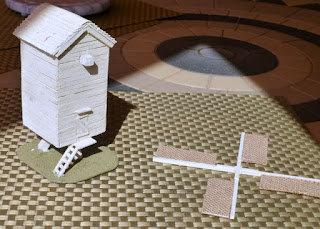 Jan was not sure what to use for the sails.   There are no model or hobby shops here in our part of Spain, but we did visit a lot of hardware and material shops looking for inspiration.  She finally settled on this hessian material.   It looks much better than I thought it would. 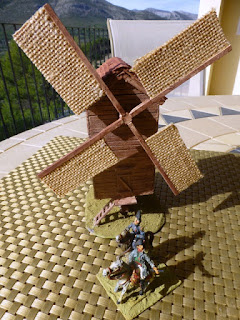 Jan makes the buildings, I paint them.   I am not very artistic, and often find wood difficult.   So I was apprehensive how a wooden windmill would look.   I must confess I am quite pleased with the final outcome.


Posted by thistlebarrow at 11:59 No comments: