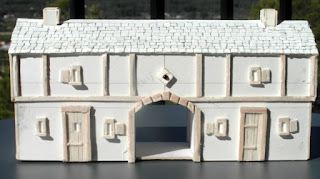 Jan’s latest addition is a coaching inn for use in Germany.   This is what it looked like after the tiles had been added, but before any painting 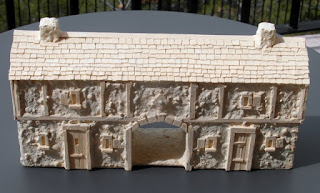 After a coating of pollyfilla and a base coat of paint 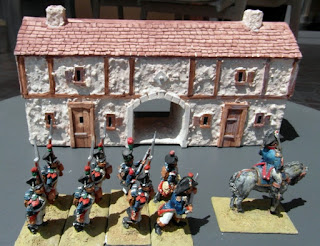 The finished building, with a brigade of French Young Guard arriving for an overnight stay.   Not sure that I like the almost white finish, I may paint it a slightly darker colour.
Posted by thistlebarrow at 20:22 1 comment: 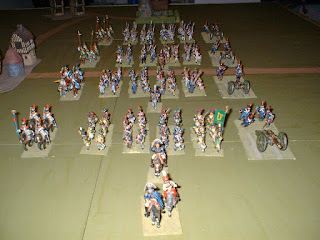 After a lot of consideration I think I may have come up with an answer to uneven cavalry v infantry combats.

Previously the only infantry defence against cavalry in my rules was to form square.   Infantry caught in line or column were very likely to be broken and routed.   This resulted in very static games when one side had cavalry superiority.

I want to be able to introduce larger cavalry formations in my campaign.  This would probably result in more uneven wargames where one side had more cavalry than the other.   I wanted to make the cavalry less all powerful against larger bodies of infantry.

All combat in my rules are decided as one brigade against another.   The balance of cavalry to infantry within corps is one to four.   So one cavalry brigade could pin four infantry brigades in square and thus dominate the game.

I do not want to change the structure of the rules.  I want to maintain the one brigade v one brigade principle.   After some consideration  I have found a very simple solution.

The revised rule can be read by following the link below to my Napoleonic Wargame Rules and clicking on Rule 15 under Labels on the right.

Posted by thistlebarrow at 13:04 2 comments: 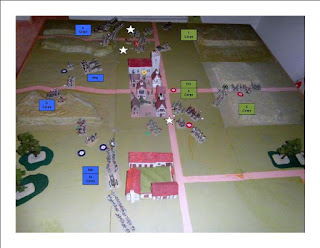 Cavalry melee during the battle of Kassel

From June to October it is too hot to meet our friends for our usual weekly mountain walks, so I have more time to sit around and consider what needs improving in the campaign.   This week map making and cavalry in wargames has been the main subject for consideration.

We use our own house rules, and they have served us very well over the past five years or so.   The big advantage of writing your own rules is that you can amend them to suit changing circumstances without upsetting the whole balance.   I always found this difficult to do with commercial rules, because I never really understood how they were written.

Our rules are designed to allow us to fight multi corps battles, using 28mm figures on a 6x6 foot wargames table.   They have to be fast, but even more important they have to be fun.

Jan and I wargame a lot.  There is always a wargame on the table, and we usually manage an hour or so at least five days each week.   All of our wargames are battles from our PBEM campaign, so they are not often the type of game we would have set up for ourselves.   Despite this, they are always enjoyable.   However they have become a little predictable.

Recently we allowed the grouping of cavalry brigades to form divisions, or corps artillery to form grand batteries, during a game.   This worked very well, and got me thinking whether I should change the order of battle for the ten armies in the campaign.

In particular I am wondering whether it would be a good idea to remove the brigades from each corps, and group them permanently as a corps of two divisions.   This would be more historical, as most armies in 1813 had cavalry corps or reserve cavalry.  Whatever they were called, they were large bodies of cavalry.

The problem is that it will produce battles where one side has more cavalry than the other, possibly one side with a large body and the other none at all.   When this has happened in the past it has resulted in long and very boring wargames.   The side with the cavalry superiority usually dominates the whole game.  The side without cavalry cover spends most of the game in squares.

I asked on a couple of forums whether anyone else had experienced this problem, and if so how they solved it.  As often happens with wargame related questions you get a lot of historical quotes.   I already know how large bodies of cavalry operated in 1813, what I want to know is how I can transfer this knowledge to the wargames table.   So far no luck.

But at least it gives me something to think about as we sit on the naya sipping cold drinks and waiting until its time to go for a swim in the pool.    It’s a hard life being retired in southern Spain!
Posted by thistlebarrow at 12:13 No comments: 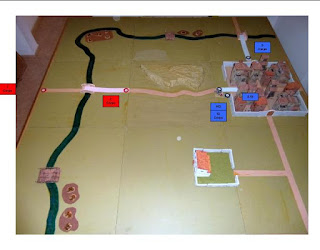 The walled city of Burgos

As expected these rules proved difficult to write.   I wanted them to be easy to understand and also easy to administer.

The most difficult part of the campaign to get right is wargaming the battles, and transferring from the map to the table and back again.   Because the whole aim of the campaign is to produce interesting wargames it’s really important to get this right.

I have always felt that there is no point in having any scenery on the table that can not be fought over in the wargame.  This is one of the main reasons I have avoided fortified town and cities in the campaign.

An unfortified town consists of two (town) or four (city) build up sections.   Each of these can hold one infantry brigade, and there are good rules for attacking or defending such.   A fortified town must mean that it can only be taken by siege.   Clearly this would not happen during a normal battle.

Each campaign phase usually lasts about ten campaign days.   This would not be long enough for an historical siege.   More important I do not believe that the campaign commanders would want to engage in a long, and boring, siege.

Equally important I did not want to deprive each commander of one quarter of his army in a siege, and then the possible loss of it at the end of the siege.   If this happened he would also lose the campaign.

So I needed rules which would encourage a commander to risk leaving his army isolated, but would not be completely without risk.

This is the first draft of the rules

The garrison will roll 1D6 to test morale each day.

Garrisons will not receive supplies or reinforcements during siege

Note – 400 casualties is 10% of one infantry brigade.   It is the standard result of one “hit” during the wargame.