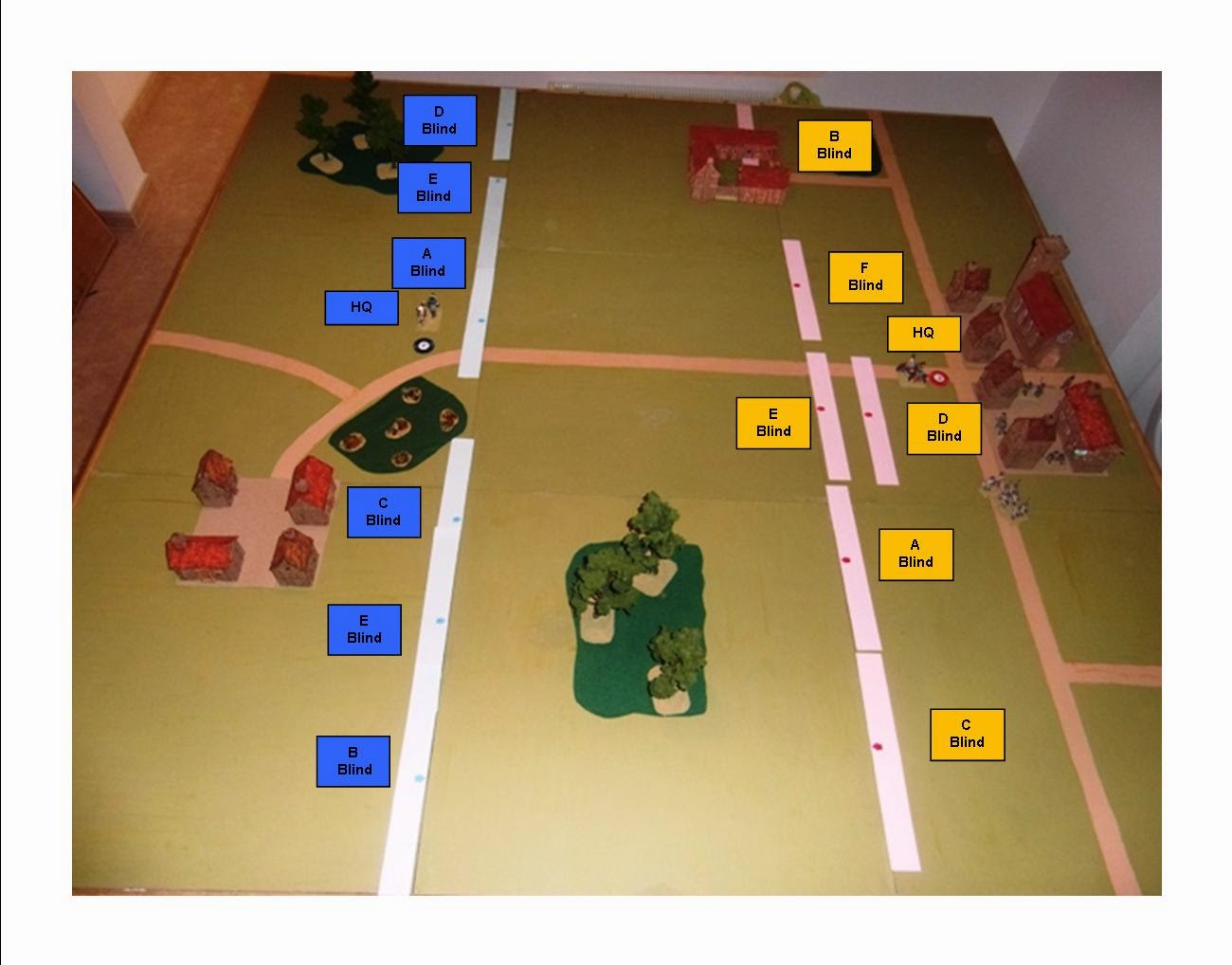 In the past we have used card to provide hidden movement.
Each side would one card per corps, plus one or two extra
When the cards approached each other each side would dice to “see” the other side
If successful the other side would replace the card with figures
Or alternatively disclose that there they were a “blank”
This method allowed us to hide the early stages of a wargame from each other
It also speeded up the early deployment

However we found that having figures on the table from the start had disadvantages
It allowed us to react to what the other was doing.
We tried to make this difficult by having deployment orders
But it was still possible to ensure that cavalry were placed to counter the enemy cavalry
Artillery was positioned in answer to the approaching infantry formations

So we have decided to introduce a simplified system of hidden movement. 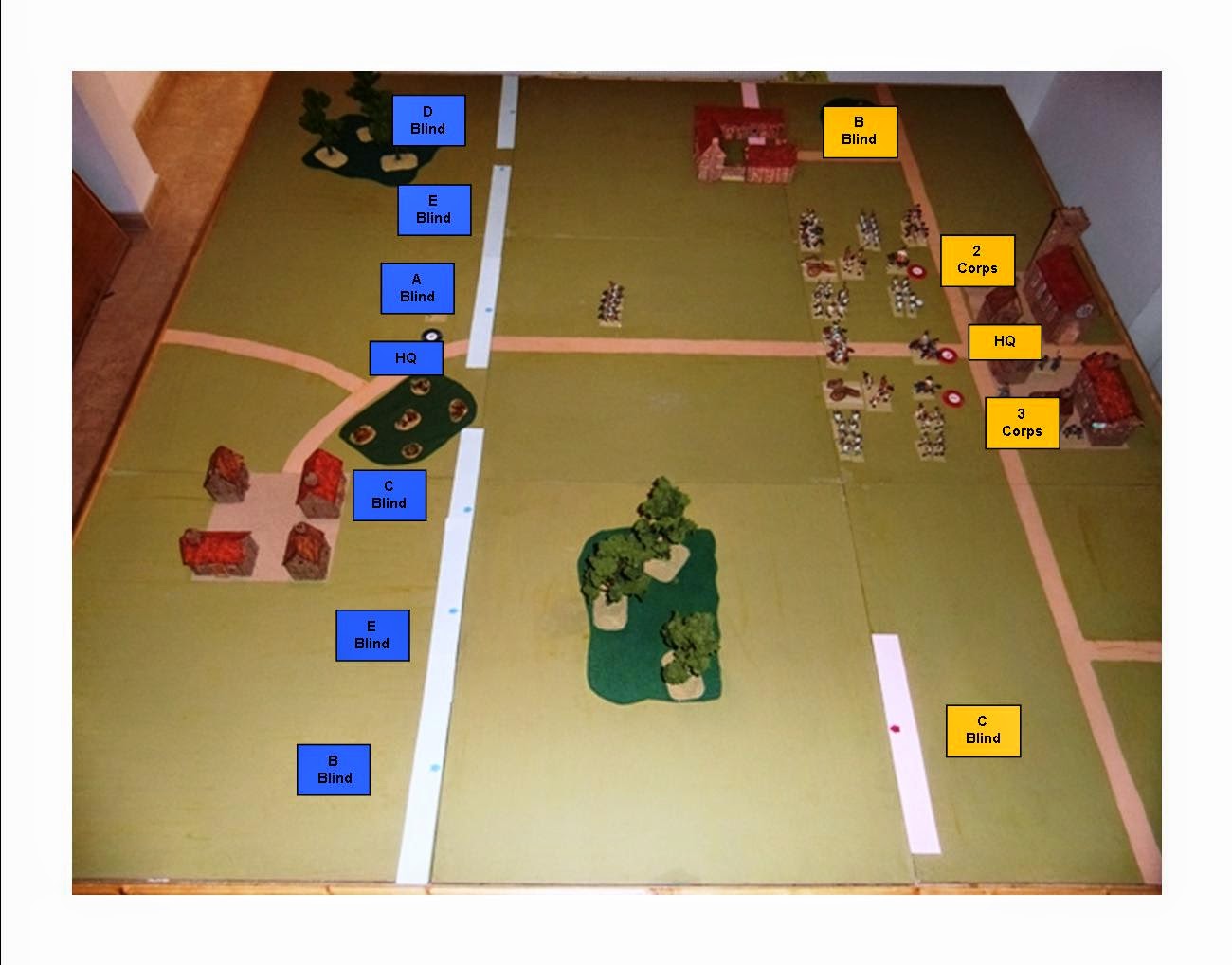 
Two were corps, which are now on the table, two more were “blinds”  now removed

At the start of the wargame both armies will always be at least 24” apart.
Each player will have one blank card for each corps, plus two spares
The two spares, called “blanks”, will be used to hide actual deployment and create fog of war

Infantry may be detached to form garrisons of BUA or woods

Apart from that all other brigades must remain on the card
No artillery is allowed to fire at, or from, the card

At any time a player can opt to replace the card with figures
They can then move as normal within the existing rules.
Posted by thistlebarrow at 10:32 No comments: 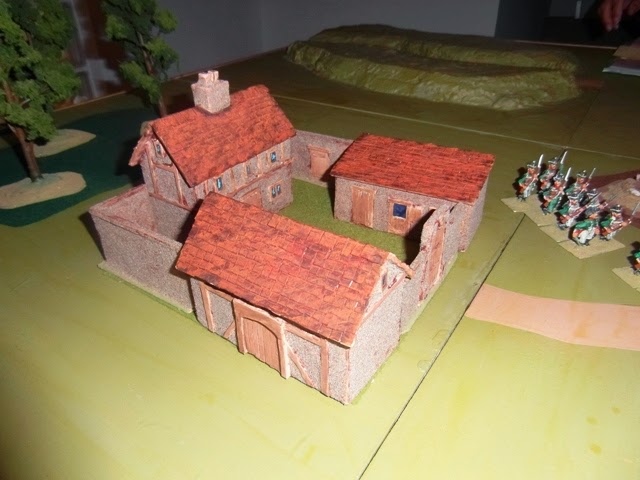 The latest addition is this northern Europe style farm complex.   It is not modelled on any particular farm from any particular battle.   We spent a few years in Germany many years ago, and travelled around Holland, Belguim and France.   And we saw lots of this style of farm complex in all four countries. 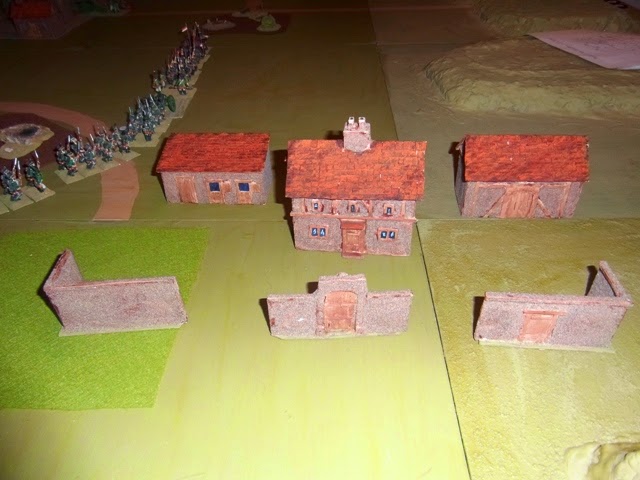 The aim of making our own wargame buildings is so that they all fit on our standard 8”x8” felt scenery bases.   I also wanted to be able to use each of the buildings in as many combinations as possible, so both buildings and walls are free standing.   Finally we remove buildings to allow measurement of troops moving into towns or farms, and also to calculate fire fights and hand to hand fighting.

Our next project is a church for northern Europe.
Posted by thistlebarrow at 15:11 1 comment: 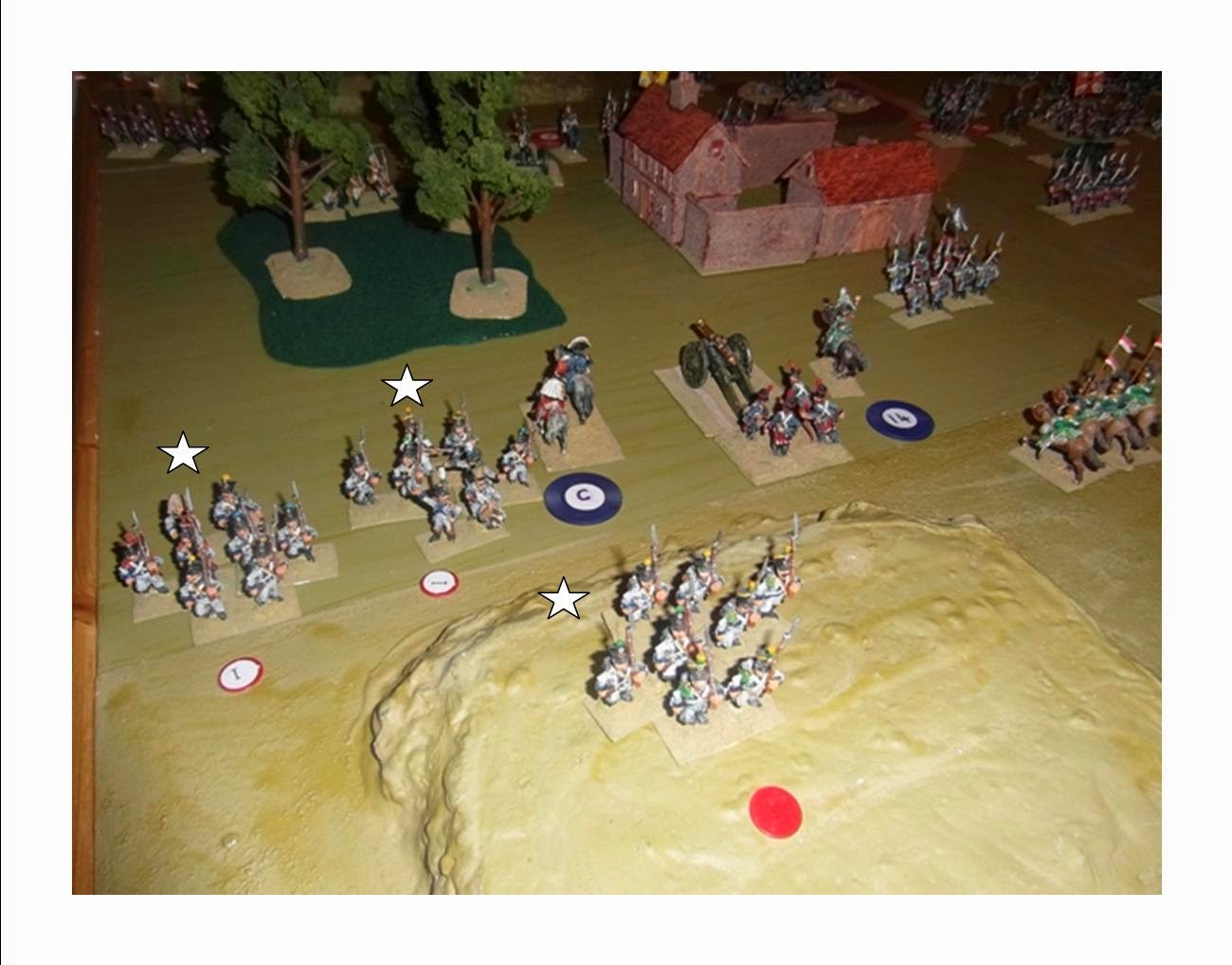 
We have been using our current “house “ wargame rules for about six years.   Over that period they have been “tweaked” a little in response to problems encountered on the table, but by and large have remained the same.   I am quite surprised that they have survived so much practical wargaming over such a long period, and still provide a very enjoyable wargame.

We spend an hour or so wargaming most days, certainly five days a week.   All of our wargames are based on our 1814 campaign.   So each game is 12 moves long, to match the 12 hour campaign day.   If necessary we will game an extra move to resolve a close run battle.   Our aim is to finish one wargame a week, to avoid undue delay in the pace of the campaign.

Even after all of this time we still have the unexpected action, which requires adjusting the rules.  This week it was artillery in general, and infantry v artillery in particular.

Most of our wargames are decided by morale.   One side starts to fail morale, which often has a knock on effect.  Within one or two moves part of one army is running away.   Our morale rules call for a 3 or more with 1D6.   The initial dice roll is adjusted by plus or minus to reflect the status or casualties of the brigade concerned.   Generally a full strength brigade will function well until they have lost two or more “hits”.   One rout affects all brigades within 4”, so a knock on effect is quite likely to happen.

Gunners seem to be particularly prone to this problem.   Loss of a nearby infantry brigade will leave them without support, which is another minus on the morale charge.   When they rout they abandon their guns.   At the end of a game it is not unusual for two or more of the four artillery crews to be in rout.

Normally gunners are most at risk from enemy cavalry.    Infantry have not proved a problem, until our last wargame.   The gunners have three, or possibly four, opportunities to fire at an approaching infantry column.  The last one at short range.  So it is quite unusual for the infantry to get close enough to engage the gunners.   When they do, we allow them to skirmish, but not volley fire.   So average infantry, with no casualties, would roll 1D6 and require 5 or 6.

We have a section in the rules called “Quick Results”.  It deals with such things as brigades caught in flank or rear by the enemy.   It provides an instant result without using the dice.   Usually cut down or rout with 50% casualties.   It now includes infantry v artillery combat.   When the infantry are 4” from the gunners the latter rout, but take their guns with them.   Nice simple answer.   No loss of guns or heavy gunner casualties.  And sufficient risk to encourage the gunners to withdraw before the infantry can get to close contact.
Posted by thistlebarrow at 12:19 No comments: