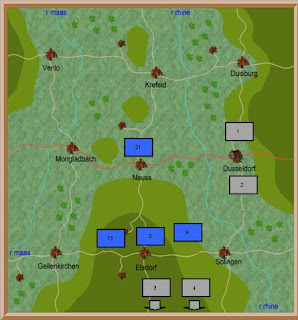 The Prussian objective was to cross the river Rhine, take and hold Neuss.   They fought, and lost, a small battle there on the third day of the campaign.   They then marched around quite a lot before being cornered, outnumbered and half of their army routed at Elsdorf four days later.

No great problem.  Through the magic of PBEM there will be at full strength and ready to start the next phase of the campaign two days later.   As I have explained before, the campaign is designed to produce battles/wargames, not to be a historical campaign.   Far better to end when one side can no longer fight, than to carry on for months trying to recover from a major defeat.

The campaign is proving excellent at the main purpose of providing wargames.    Since it started on 1 July 2013 it has provided Jan and I with 12 wargames.   Some large, some small.  Some hard fought, some a walk over.  All enjoyable.

In one of my previous 1813 campaigns all players were commanders in the same campaign area.  So when one campaign ended I had to ask them to carry on, or replace as many as choose not to.   In this campaign only two players are involved in each area.  So there is a maximum of two to replace.

So last week when the first campaign ended I posted my usual request for players here and on TMP.  I was not hugely optimistic, because in the past I have often had no response at all.  So I was delighted when three new players joined the campaign forum, and all wanted to take part in the campaign.

Better still all three were full of questions and enthusiasm.   Most often people who join the campaign forum become part of the “silent majority”.   I write to them when they join, they don’t reply and they never post on the forum.  When I ask for volunteers for the campaign they never come forward.  Don’t know why they join in the first place.   I don’t mind, all are welcome.  But it does seem strange that with 112 members only a small handful have ever taken part in the campaign.

Fortunately I have not only filled the command vacancies, but I even have a reserve.
Posted by thistlebarrow at 11:51 No comments: 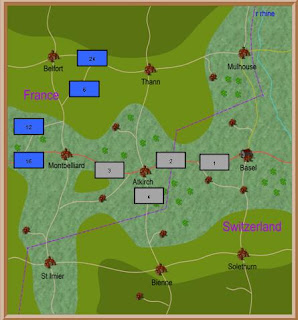 Marshal Marmont has suffered the first defeat of the campaign.

The campaign objective of Fourth French Army was to hold the most southern section of the border between Mulhouse and St Imier.     In particular they needed to hold the border town of Atkirch.

The French attacked twice in this campaign.  The first time they caught the Bavarians as odds of two to one and won.  They tried to repeat the formula.   Marmont concentrated all four of his corps and attacked 1st and 4th Bavarian corps at Atkirch.   Despite an early success the arrival of 2nd and 3rd corps turned the battle in favour of the allies.   By nightfall 12th and 16th French corps were in rout to the west, 6th and 24th corps had been forced to retreat to the north.

This comprehensive defeat signals the end of the first phase of the campaign, but not the whole campaign.   This is only one of the six campaigns areas, and the remaining five will carry on as usual.

The French will retreat to the west.   Both armies will regroup and be reinforced.   A new campaign will begin shortly.

This series of short and independent phases of the campaign were planned from the start.   Each should last about three months and hopefully provide three or four battles/wargames.   When one side wins we make a fresh start.

This means that players are only committed for about three months.  If one player makes a real hash of his command it doesn’t matter.  When the next phase starts it is with a full strength army on a new map with a new objective.

So over the next week or so I will be making out new maps and working out campaign objectives.

I will need to replace at least one of the two commanders.

So if anyone would like to take part they would be very welcome.

The campaign is likely to take about three months.  You will play the role of the Bavarian Army commander.  You will be given an objective and have four corps to achieve it.   You will be required to write orders once a week, which should not take more than half an hour.   The campaign rules are quite short and simple.   Most of the detailed work is done by me, you only have to plan your campaign, issue orders to your four corps on how you want them to achieve it, and adjust their orders as the campaign develops.

If you would like to take part you need to join the Campaign Forum at
http://uk.groups.yahoo.com/group/napoleonicpbemcampaign

When you join let me know that you want to take part in the campaign.
Posted by thistlebarrow at 11:45 No comments: 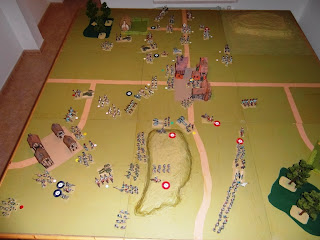 In the past I have commented on what good wargames the PBEM campaign produces.   I am pleased to report that if anything they are getting better.

I appreciate that a campaign is only interesting to those taking part, but I must confess that I have been a little disappointed at the apparent lack of outside interest in my PBEM campaign.   It has been running nonstop for four years, which must be pretty unusual if not something of a record.

The main reason for my disappointment is that it is such a great source of wargames that I wish I could spread the word more and get others to try something similar.

Of course it is quite possible that there are many wargamers out there running their own campaign and getting just as much enjoyment out of it.   But I doubt if they are PBEM campaigns, because there is the constant need to replace commanders and I don’t see how they could do that without asking for them across the popular internet forums.

The wargame which prompted me to write about this subject is the latest in our 1814 campaign.   It started as one of those battles which hardly seem worth Wargaming because the odds are so uneven.   It started with four French corps against two Bavarian corps.   A third Bavarian corps would arrive at the start of move 5 and a fourth at the start of move 9.   Each wargame only lasts 12 moves, so the outcome seemed obvious.

At the end of move 7 the French were about to overrun the two Bavarian corps.   At the end of move 12 both sides have lost heavy casualties, both have lost more than half of their infantry brigades to rout.   It all hinges on hand to hand fighting in the central village.   The melee has gone on for three moves, each of them a draw.   One brigade is B class, the other C class, but casualties evened out the difference.   B now has 30% casualties, C has 20%.   It’s a miracle that either are still fighting.

Who would have thought that such an uneven battle could run the full twelve moves and still need one more to decide the winner!

So if any of you reading this blog have not tried fighting a campaign I would urge you to do so without delay.   For those of you solo wargamers, who find it difficult to motivate yourself, then do please try PBEM.   They can be frustrating and thankless, but the credit far outweighs the debit.
Posted by thistlebarrow at 15:14 5 comments: 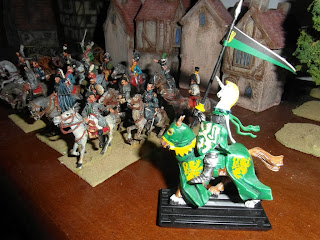 My son and his young family have just spent their annual two weeks summer holiday with us.   When I met them at the airport Jack, aged 6, was excited about a present he had bought his granddad (me).   He wouldn’t say what it was, but kept talking about it during the hour drive home.

When we arrived he insisted his mum open their suitcase and handed me a gift wrapped box.   When I opened it I found a mounted knight.   Jack explained that it was to go with my toy soldiers.   Despite the late hour he insisted I take him to the wargames room and put him with the other toy soldiers.

Not sure what Napoleon and his marshals make of this brightly coloured newcomer.   But he now takes pride of place in my collection.

His dad was never interested in model soldiers and Wargaming.   When he was Jack’s age he would sometimes use the wargames table to race his toy cars, but as he grew older he never developed any interest in Wargaming at all.   All of his friends were always asking about it, but never him.

We thought that Jack might like to roll a few dice for us, but he would not be tempted away from his Superman computer game.   Perhaps when he is a little older?
Posted by thistlebarrow at 12:15 No comments: