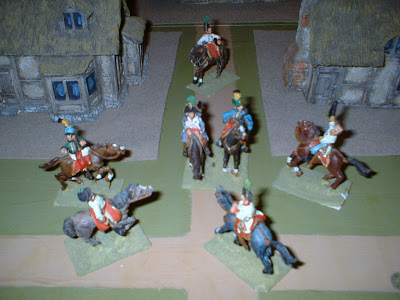 Posted by thistlebarrow at 18:14 No comments: 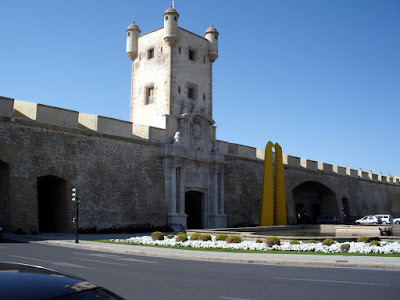 On our recent visit to Seville we travelled by coach, and part of the package was a very short visit to Cadiz. In fact it was at the end of a day which included the Royal Spanish Horse Riding School at Jerez in the morning, and a visit to a wine and brandy Bodego after lunch. It was about 6.30pm when the coach arrived at Cadiz.

We had a tour of the city in the coach, which brought home to us how small the city is, and in particular how narrow. We were then dropped off in the main square of the old city with just one hour to explore on foot. The tourist information centre was close, and they provided us with a map and confirmed that we could reach the main part of the city walls still standing within five minutes.

The walls are in a good state of repair, and the casements seemed to be a military installation. Consequently it was not possible to climb and walk on the walls, but we could walk around them and take some photographs.

An hour is not enough to do justice to the city, but it did make us feel that it would be well worth a return visit using our own transport. There looked to be enough to spend a full day exploring the city, and of course the battlefield of Barossa is very close.

There are more photographs at 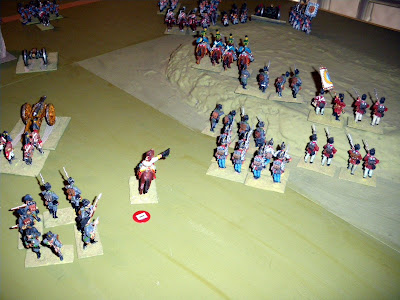 The battle of Branau was a limited victory for Archduke Charles. He attacked Branau with two corps to prevent Marshal Oudinot moving his 9th Bavarian corps south of the river Danube to join the main army. Although the Austrians took the town, they were unable to prevent the Bavarians joining forces.

After 24 moves Marshal Oudinot has finally managed to concentrate his four corps. He has been forced to withdraw towards Munich, but is faced with a problem in the Tyrol. If he orders 11th corps to withdraw in line with the rest of his army there is a real danger that the local population will join forces with the invading Austrian’s. He reluctantly orders them to hold the city and surrounding area until he can regroup the rest of his army in front of Munich and strike at the advancing Archduke Charles.

The campaign has lasted 12 weeks and provided three good wargames so far. Although the Bavarian/Baden army has had to give ground in order to concentrate, they are still capable of winning the campaign. The Austrian army has won all three battles to date, but has not been able to achieve a decisive victory.

I have posted an update on the blog each day for those 12 weeks, in the form of a diary. The aim is to provide a step by step guide to a campaign for future reference. There has been a lot of interest in our wargame “house rules” and I have also done a detailed entry for each move of each wargame, again as a reference.

The 1813 campaign has been running for 13 months, and so far has only covered four of the five campaign areas. It was a lot of work setting up the campaign, but has proved to be well worth the effort.


Posted by thistlebarrow at 22:14 No comments: 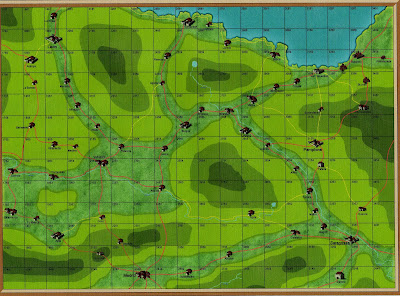