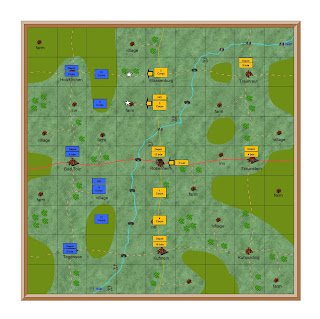 Having concentrated two corps at Wassenburg, Schwartzenberg immediately ordered them to attack Holzkirchen.   Both corps had battle casualties, but he was determined to take full advantage of the Bavarian retreat from the river Isar.

9th and 10th Bavarian corps have just arrived in front of Holzkirchen.   They also have battle casualties, and are also running short of supplies.   The attack takes them by surprise.

In the south Oudinot is confident that he can hold the line of the river and the towns of Bad Tolz and Tegensee.  He is happy to leave the initiative to the enemy.

Schwartzenberg is also content to allow a lull in the south.   An attack over a defended river line is not attractive.   He does however order a concentration of supplies at Rosenheim in preparation for any future advance. 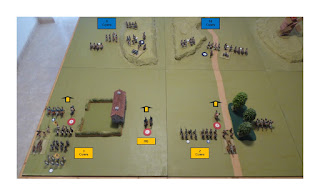 Battle of Holzkirchen
Both armies are evenly balanced, and both have battle casualties

The Bavarians have the advantage of being in defence, and holding a strong defensive position.   They also have a garrison in the fortified town of Holzkirchen  which would cover any retreat.

Schwartzenberg declines to attack down the centre, which is dominated by the Bavarian artillery.   The result is a wide gap between his two corps, which can not therefore support each other.

The battle opens with effective artillery fire, which is quickly followed by two cavalry melee.  The Austrians win both melee, and two Bavarian brigades retreat in rout with heavy casualties.

Without cavalry support the Bavarians fall back on the Holzkirchen.

Holzkirchen is a good example of a careful but determined attack.

Schwartzenberg sends forward his artillery to soften up the enemy.   He keep both his cavalry and infantry in reserve out of artillery range.

The Bavarian cavalry charge and rout 3rd corps artillery, which is attempting to deploy in front of the infantry and cavalry.   They rout the gunners, but are then counter charge by the Austrian cavalry and themselves routed.   The Austrian cavalry advance and pin the enemy infantry, and their own advance in support.

2nd Austrian corps artillery force 10th Bavarian cavalry to retreat, and the remainder of the corps advance.   Their cavalry charge, and rout, the shaken Bavarian cavalry.

The remainder of the Bavarian army retreat before they are pinned by the enemy cavalry.

Neither side have lost many casualties, other than Austrian gunners and Bavarian cavalry.   The Austrian victory is far from decisive, but it has also been achieved with very few casualties

The Bavarians now have a serious problem.   They cannot retreat far without moving off the map and out of the campaign.   However without any cavalry they will be at a serious disadvantage if they have to fight again.

Having come close to defeat earlier in the campaign, the Austrians are now in a very strong position and look to be favourites to win the campaign.

This campaign has had some unexpected turns! Very cool. Is there a point at which you'd call it quits if the armies keep going back and forth like this?

Each campaign phase tends to come to a logical conclusion. But I never end one until it becomes clear that one side can no longer hope to achieve the campaign objective.

This is usually when the aggressor has sufferent sufficient battle casualties that he is no longer of launching a further attack.

Or alternatively when the aggressor has defeated the defending army and caused them to retreat off the map.

The course of the campaign is never planned in advance, it is always as a result of the natural consequences of each battle fought.

Intereting that although all of the previous 72 phases have started with a similar scenario, no two of them have followed exactly the same route. Or perhaps that is just my memory of them all!