Thoughts on the Toledo Campaign 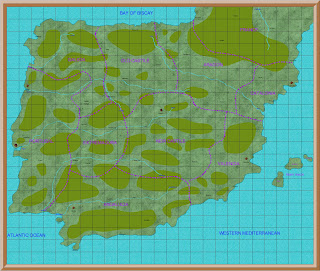 The Iberian Peninsula has long been my favourite of all the Napoleonic campaigns.

In 1969 I knew almost nothing about Wellington or the Napoleonic Wars.  Finding Jac Weller’s Wellington at Waterloo led to me to the companion book Wellington in the Peninsula.   This excellent introduction was followed by a long reading list, not least Napier and Oman’s excellent histories of the conflict.

I have always enjoyed painting the British and Spanish armies, the Portuguese less so.   In particular the variety of Spanish regular and irregular uniforms were a welcome relief to the never ending red and blue of the British and French.

But I have always found wargaming the campaign very disappointing.   Using a variety of commercial wargame rules over the years always resulted in the Spanish armies running away almost before the French reached them.   The French in turn almost always lost to the superior firepower of the red coats, and the remarkable efficiency of the riflemen.

It was only when I developed my own wargame rules, and even more the campaign rules, that the Spanish at last had a chance of holding their own. 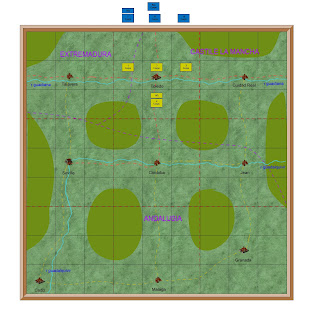 In my rules the Spanish cavalry are very ineffective.   Not only are they low quality, but there is not very many of them.

The infantry are almost all low quality, but there are a lot of them.    They are supported by a large number of militia/guerrilla who are equally poor fighters.

The artillery are the pride of the Spanish commander.   They have the same morale and combat ability as the French gunners.

Spanish field armies are usually defeated.   But that is ok providing that they damage the attacking French brigades at the same time.   The further the French advance, the longer their lines of supply, and the more vulnerable to the many guerrilla brigades.   They usually lose against the French garrisons and supply convoys.   But they only have to win once, the French have to win every time.

All of this results in a historically correct to the campaigns fought in Spain.   Or at least I think so. 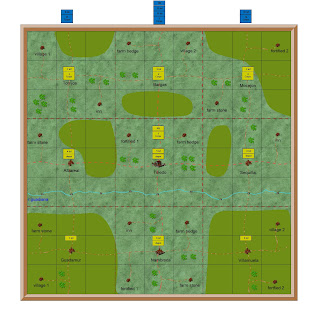 This was the first campaign phase in Spain since I reorganised the overall campaign.

The concept is that each region will have nine districts, and each district would provide one campaign phase.   All of these phases would be stand alone, but would have a narrative which provided an overall direction to each phase.

This resulted in my first error.   In the past each phase was stand alone.   There were the same nine towns, each of which was also a wargames table.   The French would start in control of three, the allied army another three and the final three would divide the two armies.   Thus is one side lost the opening battles, they would have space to retreat and regroup.

Toledo district is the centre top on the regional map.   The French enter the map at the start of the campaign.   I had assumed that they would win at least one or two of the opening battles.   This would give the Spanish corps the maximum amount of map to retreat, and ensure the French would have to maintain a long supply line.

I had not anticipated that the French would be unable to break through the three northern towns, and would have to retreat off the map when they failed to do so.  In our campaign rules any corps that retreats off the map may not enter again during that campaign phase.   This is to ensure that the phase is concluded within a reasonable time frame.

This led to an unexpectedly short campaign of only five days and four battles.

On the other hand all four wargames were different and very enjoyable, despite my being the French player and losing the campaign.   I won two of the games, and lost the other two.   I should have won all four, but over confidence led me to be unable to respond to unexpected setbacks (that is to say low dice throws).

I usually command the French armies in southern Spain.   Although they usually defeat the Spanish regular corps, they have great difficulty with the guerrillas.  However this time I lost two battles due to my own tactical skills, and lost the campaign phase due to equally poor strategic skills.   By the end of felt very much like Dupont must have felt at the end of the battle of Baylen.

But I am really pleased that it has confirmed, for me at least, that both my wargame and campaign rules do exactly what they are designed to do.   Provide a fun wargame, in no more than 12 moves and allow both commanders an equal chance to win.   Whilst at the same time produce not only a series of games, but also a campaign, which feels distinctly Napoleonic.