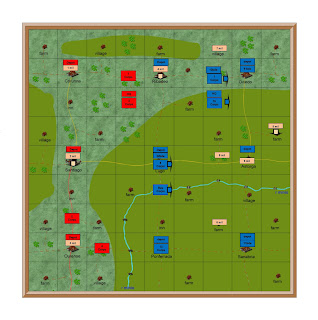 Campaign Map on 30 October 1813
7th and 16th corps retreat to Oviedo
Both are now out of supply, and will lose attrition casualties until they resupply
There are only 5 days supplies at Oviedo, but that is sufficient for them to regroup
It will however take some days before either are operational again

Their retreat in the north also force 8th and reserve corps to retreat to Lugo
Both are low on supplies (two days each) and there is only one day at Lugo
They will have to continue their retreat to Astorga, and resupply from Sanabria

Wellington’s army is also running short of supplies (two days each)
But he is much closer to his supply depots, and will be fully supplied within two days
This will allow him to move on to the offensive

Soult is well aware of his desperate situation, he orders a general retreat.

Campaign Notes
It was interesting to see how the French managed to lose the campaign, despite making most progress through the campaign.    They managed to push Wellington into a small area between Santiago and Ourense.   One more victory would have sent the British back into Portugal.

However it was extremely difficult for the French to concentrate against such a good defensive position.

This was largely due to the supply system, and the luck of the Spanish guerrilla in disrupting it.   If the French could have concentrated and regrouped at Corunna and Lugo they could have routed the British.   But it proved too large an area, and too many and much too long supply lines

It is also interesting to note that both 4th British corps at Ourense, and 13th Polish corps at Ponferrada took no active part in the campaign at all.   Yet they played a vital role in the eventual victory.

Ourense commands the vital road to Portugal, along which all supplies must move.   It had to be held by a strong corps, which meant that 4th corps could not be used to support the main army.   It might have been replaced by a corps which had suffered heavy casualties, for example 2nd British corps.   But that would have invited an attack by the Polish corps over the river Minio.   Had they taken Ourense that would have been the end of the campaign.   Worse still Wellington would have had to retreat to Corunna to save his army (sound familiar?)

I am very pleased with how this campaign went.   It was uncertain right up to the last  battle, which could just as easily have been won by the French as the British.  The Spanish guerrilla again played a vital role in the campaign.  Not because they were a formidable enemy, but because they could not be ignored.   It was sometimes tempting to do so, but that was when they then rolled a 6 and captured Astorga.

This has been one of most interesting campaigns that you have run. It felt like it could easily have been an actual Peninsular War campaign.

Over what part of a Europe will the next campaign be fought?

I am really pleased that you enjoyed it. I must admit that it has been one of my favourite campaigns. However, as with our hill walking, my most recent campaign often is my favourite. That must be a good sign, and one that there is still a lot of life in the 1813 campaign.

I am particularly pleased that the campaign takes on a direction of its own. I direct the flow at the start of each campaign, but they soon take over what happens next.

The next campaign will be set in Central Germany. Davout's Second French Army v Wittgenstein's Russian Army. Main difference between the two are more 12 pounders and cossacks on the Russian side. A Young Guard corps, including 12 pounders, on the French, but then three slightly below average corps in support. Should make for an interesting mix

But I must admit I will miss the guerrillas

I played with the idea of Prussian free corps in lieu of guerrilla, but felt that it was pushing history a little to compare the two.

That was quite the rollercoaster :-) I think Soult has the right idea. Any further offensive action would risk the destruction of his entire army. Well done Nosey! Goes to show you don't have to destroy your enemy to defeat him: just put him in a bad enough position.

Oh and having some guerillas tearing up the enemy lines of supply always helps.

Thanks to you Jan and Paul for keeping your campaign up during these troubled times. I'm glad you're both still safe and healthy. Looking forward to the next installment!

I think we are very lucky to have a hobby like wargaming at a time like this. The lockdown in Spain is very strict, no one allowed to leave the house to exercise at all. And on top of that we have had three weeks of almost non stop rain, very unseasonal for Spain.

However we have a couple of moves on the wargames table each day, and it really helps us both to relax - though perhaps not when we roll particularly bad dice. And no one complains if we spend too long wargaming.

Terrible experience for everyone, and the future looks pretty bleak. So it is good to have something to take our minds off it all