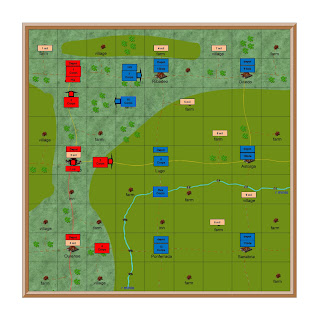 The consequences is that they have lost the initiative, which has been taken up by Wellington.
Posted by thistlebarrow at 11:15

What an interesting turn around, although it’s too early to assume an eventual Allied victory.

It’s nice to see the important role played by the guerillas.

I am really pleased with the way the campaign is developing, and particularly the influence of the guerillas. Mostly due to luck of the dice, but quite historical for all of that.

As Bob said, these past few campaign days have been a very interesting twist to what seemed to be a cakewalk for the French.

If I read everything correctly, the British 1st and 3rd Corps are in good shape and supply right now, while the French 7th is in a shambles. Can Wellington pursue aggressively towards Ribadeo before the French have the opportunity to rally and resupply?

7th French corps was out of supply and forced to retreat. They would have to evade any British pursuit, find a supply depot and be given at least 24 hours to rally and resupply.

So at that time it looked certain that Wellington could pursue with either 1st or 3rd corps and destroy 7th French before they could rally.

However. On 28th October the French attacked and captured Santiago. This is Wellington's main supply depot, and commands the lines of supply to Portugal. He could ignore this, but would then have to rely on forage to keep his Army going long enough to defeat the rest of the French army.

Interesting how both commanders seem to be on the verge of winning the campaign, only to have it taken away from them by unforseen circumstances. In this case a very lucky guerrilla attack on the main French depot at Astorga.