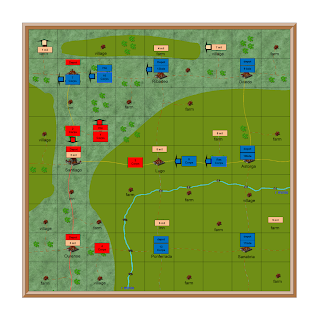 He also orders 8th and reserve corps to advance on Lugo
Campaign Notes
Soult has achieved his first objective, the capture of Corunna.
But in doing so he has worn out 7th and 16th corps
He has also advanced beyond his depots.

Both 7th and 16th corps are now reduced to one days supplies
They must halt to resupply, or lose casualties to attrition
The two days supplies captured at Corunna will help but will not solve the problem
Soult orders a new depot to be established at Ribadeo

Wellington is now aware of the French offensive in the north
Despite winning the battle of Corunna, 2nd corps has had to retreat
This was caused by the approach of 16th Italian corps

Wellington now orders 1st corps to move north to join 2nd corps
He will then counter attack to retake Corunna.

However Soult has already ordered 8th and reserve corps to take Lugo.

If Wellington continues with his planned attack on Corunna he will run the risk of losing Santiago and having his army split in two.

Meanwhile a third Spanish militia brigade has been forced to move into the mountains and become a guerrilla band.   There are now seven such bands, and three are concentrated in the north.   As the French advance they leave a series of brigades behind as garrison and depot.   Not only is each garrison open to attack by the guerrilla bands, but also the necessary movement of supplies to the front.

After three days of campaign everything is looking very good for the French.  But there are many problems about to rise to the surface.
Posted by thistlebarrow at 12:40