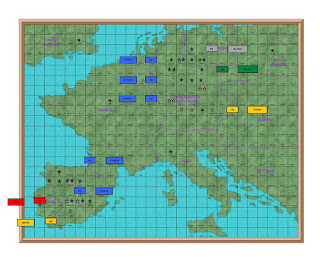 Each star on this map shows the location of a campaign phase, and the colour of the star indicates which side won.

Rosenheim was the 32nd phase of the latest 1813 campaign.   It is appropriate, if unlikely, that each side has won 16 campaign phases.  In each campaign area there have been 6 or 7 campaign phases so far.

There is no strict sequence to determine which area will host the next phase.   All ten armies have very similar orders of battle, but each has its own strength and weakness.   The main difference is between Germany and Spain.   In the former there are three standard armies on each side.   In Spain the two allied armies have guerrilla forces to support the field armies.   For this reason I tend to alter campaign phases between Germany and Spain.

As the last campaign phase was set in southern Germany, the next will be in Spain.   There have already been six campaign phases in both northern and southern Spain.   The last phase in the south was Albacete, which ended in May 2019.   The last phase in the north was Leon, which ended in July 2018.   So the next phase will be set in northern Spain. 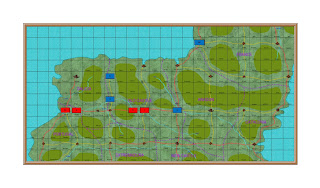 This map shows the previous campaign phases in northern Spain.   The colour indicates which side won, and the number is the sequence of the phases.   For example the first phase was Valladolid and was won by Wellington.

Although this map shows the ebb and flow of the campaign, the last victory does not decide where the next phase will take place.   It is more important for me to have a new location for each phase.   This makes it easier to record the campaign and gives a different combination of town names.

When I started the 1813 campaign I followed the flow of the campaign on the map.   But this often resulted in two or more phases taking place in the same place.   For example there were two Valladolid and two Madgeburg phases.   This made for a very complicated map when I recorded the location of each battle.

So when I am ready to choose the next campaign phase I look at the area map to see where the previous phases have taken place.   I also read up the latest campaign summery, which is a brief history of the campaign in that area.   I then work out a simple background to the next campaign.

The next campaign will be set in Santiago.   That is the walled city top left on the map.   You will see that the last phase (number 6) was at Leon, and the French won.   So it makes sense for the British to retreat to Santiago.   That will be the campaign objective for the French.   Wellington will also want to hold Corunna with its harbour and also the main road south to Portugal.

If Wellington should lose this phase I will have to decide whether to retreat into Portugal, or to create a good excuse for the French to retreat east towards the French frontier.   Santander would be a good location, and would move into a previously unused area.

If the Allies do concentrate around Santiago, one hopes that the Spanish will be inspired by St James’ to fight even harder than normal.

No regular Spanish army in the north, only militia and guerrilla.

I wish Wellington well trying to get them to fight at all, let alone fight well.

However I could be wrong, I certainly have been many times in the past