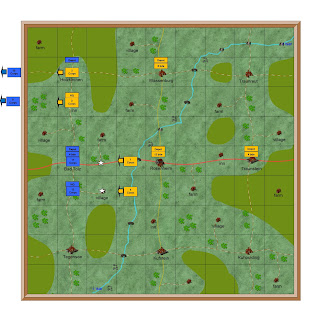 Schwartzenberg is determined to complete the destruction of the Third French Army.
He orders 1st and 4th corps to attack Bad Tolz and destroy the enemy 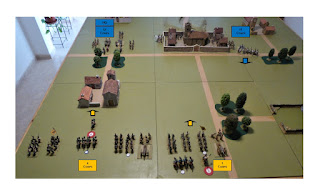 Battle of Bad Tolz
Schwartzenberg wants to compete the destruction of Oudinot.   He is not particularly interested in either Bad Tolz or the supplies held there.

He orders 4th corps to attack the village to the south, and swing north to cut the road behind Bad Tolz.   The battle opens with a cavalry melee, which the Austrians lose.   This causes the two infantry brigades supporting the attack to panic and rout.   By mid-morning half of 4th corps is running away.

However 11th Bavarian corps continues to hold Bad Tolz, and completes the withdrawal of the supplies.

Campaign Notes
Both armies start the battle with heavy casualties from the earlier fighting.   Consequently both sides have brittle morale, and any rout is likely to spread throughout any nearby brigades.

For this reason Schwartzenberg has decided to ignore the strong walled town of Bad Tolz, and concentrate on the enemy holding the village to the south.  He orders 4th corps to take the village. The battle opens with a cavalry melee, in which both brigades have 10% casualties.   The Austrians are heavy cavalry, and charge the Bavarian hussars.   The odds are in favour of the Austrians, but the dice are not.  They lose and rout.

There are two infantry brigades in support of the cavalry.   One has 10% casualties, the other 20% casualties.   As the cavalry rout they must test their own morale.  Both fail.   Both Rout.   4th Austrian corps have now lost half of their infantry and all their cavalry.

Fortunately things are going better for 1st corps in the north.   Most of the Bavarians are within the walls of the town.   A small force of one infantry, one cavalry and the corps artillery are deployed to hold the area north of the town.   Again the Austrian cavalry charge the enemy cavalry, but this time they win the melee.   They retire out of range of the Bavarian artillery to hold the Austrian right flank.   The remainder of 1st corps is ordered to support the attack on the village.

Heavily outnumbered the Baden corps hold their ground.   The area between the village and the town is so crowded with troops that it is difficult for the Austrians to use their superior numbers.   They recall their cavalry and send them against a militia brigade.   The Austrians roll two dice and get two ones!   The cavalry fail to charge home, and make the traffic jam even worse.

Eventually the Austrians withdraw broken infantry and cavalry and replace them with relatively french infantry.   They smash the remaining Baden infantry.   However it takes them until move 12 (nightfall) to do so.

The Bavarians have held the town all day.  They have achieved their objective of removing all of the supplies held in Bad Tolz and have suffered only minor casualties.

They have won the battle

But the Baden corps has joined the rout.   Only one Bavarian corps is left to face the four battered Austrian corps.   They are safe for the moment, but further retreat is unavoidable.
Posted by thistlebarrow at 18:16

I don’t remember a similar situation occurring in your previous campaigns. Both sides have almost fought each other to a standstill, and the Austrians have just managed to edge ahead ... but it seems to me that they need to exercise some caution when it comes to what they do next.. They might beat the remaining Bavarians, but almost immolate themselves in the process.

A very interesting situation in what has been a very enthralling campaign.

I can't think of another campaign phase where both sides are almost fought to a standstill.

Once a corps moves off the campaign map they are finished, they can not enter the map again during that phase. In this case two of the Bavarian corps had done so.

I should really have left 11th Bavarian and 12th Baden corps alone at Bad Tolz until all four Austrians corps had regrouped and resupplied. They would then have been able to attack with odds of two to one, and could have won an easy victory.

But had I done so it would have been difficult to justify keeping two corps at risk, when their obvious option would be to retreat to join the rest of the Bavarian army.

So this battle was fought with the limited objective of holding Bad Tolz for just 24 hours, to allow the Bavarians to withdraw their remaining supplies.

It proved an interesting and enjoyable wargame, particularly when the Austrians lost half of one corps as a result of losing a cavalry melee. Both armies had considerable battle casualties, making almost all of the brigades liable to lose morale if forced to take it.

The game lasted the full 12 moves, and right to the last move either side could have suffered a major loss of morale.