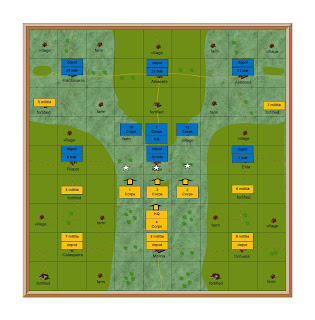 Campaign Map on 19 September 1813
Giron launches a surprise attack by his whole army on Hellin
Suchet has dispersed his army to support his supply bases
He has concentrated his supplies at Hellin, and is not prepared to abandon them
He orders his army to concentrate and hold the town 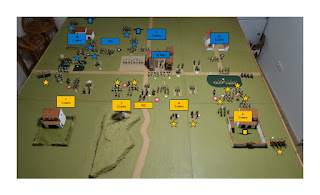 Battle of Hellin -  last move
Three French and four Spanish corps took part in the battle of Hellin
Both sides started the battle with previous battle casualties
This was a very hard fought battle, and both sides lost heavy casualties
The Spanish took the left flank and half of the town
The French held the right flank and half of the town
By nightfall the French had seven brigades in rout, and the Spanish ten
All of the remaining brigades on both sides had heavy casualties
The deciding factor was one of command and control, plus supply
The Spanish were not capable to regrouping their army to fight a second day
All four corps were reduced to one days supply each and could not resupply

The result was a draw, but as the Spanish retreated the French could claim a victory.

Campaign Notes
This was a fitting final battle to decide the campaign.

Both armies had battle casualties.   Most brigades started the battle with at least  10% casualties.  This reduced their combat ability and made them very vulnerable when testing morale.   One rout could easily affect nearby brigades who had such casualties.

The Spanish had the disadvantage that one of their corps would not arrive on the table until the start of move 5.  It would take them four moves to advance and deploy, leaving them only four moves of fighting.

The battle opened well for the Spanish.   The French artillery were ineffective against the approaching Spanish infantry.   Only three Spanish corps were involved in the initial attack, but they still managed to take the woods on the left and half of the town.

The fourth Spanish corps was tasked to take the remaining half of the town.   Both the artillery and all four infantry brigades started with 10% casualties.   They fought hard to take the town and routed the initial garrison.  But the French counter attacked with a fresh brigade and managed to hold until nightfall.

At nightfall the Spanish held the left half of the table, and the French the right half.  The French had lost seven of their brigades in rout
The Spanish lost ten brigades, including half of their artillery

Darkness would allow the French to redeploy to hold their half of Hellin, and prepare a counter attack against the Spanish held half.   Their remaining brigades had less casualties than the Spanish brigades.

The deciding factor was supplies.    The French had managed to resupply before the battle and had three days each.   The Spanish had only one day, and were too far from their depots to resupply.

The Spanish must retreat or start to suffer attrition casualties.   They retreat.

I'm already looking forward to the next campaign!

Thanks as always for your comments, which I appreciate and respect

I am particularly pleased that you are enjoying reading the campaign. For many years I have mostly kept the campaign off this blog. That is because I have a blog dedicated to the campaign. It is like a military diary, and covers every day and every battle. But I feel it is very dry reading and probably quite difficult to follow.

A few weeks ago I "dried up" on this blog, and couldn't think of anything for my weekly post. This was mainly because all of my wargame activity was on the campaign.

I wanted somewhere that I could explain and discuss things which came up on the campaign. For example rule problems or a new command concept. I couldn't do that on the campaign diary, because that is meant to be a factual record of the campaign. And to do it on this blog would involve explaining a lot of the campaign background. So I decided to do a weekly roundup of the campaign. The idea is to give a short description of what happened each campaign day, and then discuss an aspect of it below.

It could easily have become just a repeat of the campaign diary. So I am very reassured to receive your comments that you are enjoying it.

Hi Paul, would you prefer to have comments and discussion on this blog? I follow the diary too but I can imagine this being the better place to talk about the progress of the campaign and any questions about the mechanics.

And I agree with Rob, this was a fantastically exciting campaign and tense to the very end.

I think this is the best place to comment or raise any question.

This blog was always designed to allow me to comment on a wide range of Napoleonic and wargaming subjects.

I tried to keep the two blogs separate, because I felt it would be a duplication if I wrote much about the campaign on this blog. However recently I have found that I run out of subjects to post each week. This is because all of my wargame attention is focused on the campaign.

I did sometimes raise something on this blog which was inspired by the campaign blog. But I found that I then had to explain all of the background, which must have been boring for those who had to read through it all!

That is why I decided to include discussion of the campaign on here. The idea was to give a simplified update on what has happened on the campaign over the past week, and then comment on how that affects rules etc. I was not sure it had worked, so I am really pleased with the kind comments I have received that some readers have enjoyed it.

Do please keep the comments coming, and feel free to raise any questions you might have. If they are too complicated to answer in a reply, I can always post an extra blog post to answer them